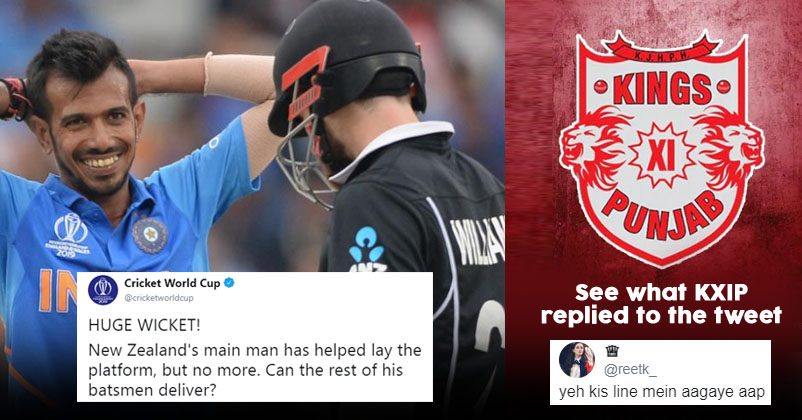 Indian skipper Virat Kohli and New Zealand’s captain Kane Williamson is facing each other today for the semi-finals of the mega cricketing event World Cup. Semifinals are here and everyone is hooked with their television sets. Top 4 teams who have qualified for the semi-finals are all set to compete for the silver trophy of the world cup.

Kings XI Punjab’s official Twitter handle seems to be in a fun mood. They retweeted a picture shared by the official twitter handle of the Cricket World Cup on Kane Williamson’s dismissal by Yuzvendra Chahal. Cricket World Cup wrote, HUGE WICKET! Kane Williamson goes for 67, skewing an outside edge off Yuzvendra Chahal to Ravindra Jadeja at point. New Zealand’s main man has helped lay the platform, but no more. Can the rest of his batsmen deliver?

HUGE WICKET!#KaneWilliamson goes for 67, skewing an outside edge off Yuzvendra Chahal to Ravindra Jadeja at point.

New Zealand's main man has helped lay the platform, but no more. Can the rest of his batsmen deliver?#CWC19 | #INDvNZ pic.twitter.com/V3IPRMK3x9

Yuvraj Singh Talks About His IPL Career And Not Playing With Kolkata Knight Riders
Virat Imitates Jasprit Bumrah On The Field While Practicing, Watch Video Here