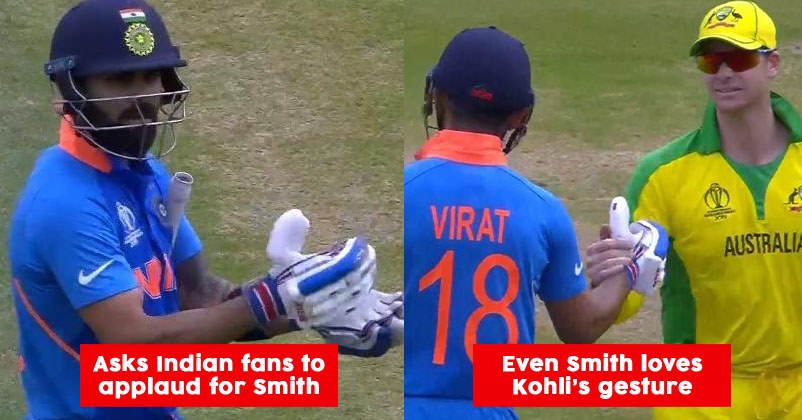 Millions of cricket fans from all around the world made sure to finish their work on time. So that they can make themselves available to watch the nail-biting match of India vs Australia.

Well, what a match for the first time in the history of ICC World Cup Australia the five times world cup winning team had to chase the highest score against team India.

Sledging and Australia goes hand in hand and we all know WHY! But the fans recently turned the tables in England. Australia’s ace cricketer David Warner and Steve Smith were being brutally booed by the England crowd for the sandpaper incident of last year.

In yesterday’s match former Australian captain Steve Smith was booed by the Indian fans who addressed him as a ‘Cheater‘. While he was fielding near the boundary line.

When Indian captain Virat Kohli noticed Indian fans booing Smith and it didn’t go down well with him. In between overs Virat immediately urged the fans to stop and applaud for the Australian skipper rather than chanting cheater.

Legend. Thank you from Aus. pic.twitter.com/Ur8jZtvrRO

Later in the Press Conference Virat was asked about the incident to which the Indian Skipper replied, He has apologised, and come back. He has been down. It is not okay to boo & didn’t want Indian crowd to set a bad example. He doesn’t deserve to be booed. So I apologised to him on behalf of the crowd.

“If I was in a position where something had happened with me, and I’d apologised and accepted it, and came back and still I would get booed, I wouldn’t like it either.”#ViratKohli on why he asked the fans to stop booing Steve Smith. #CWC19 | #INDvAUS pic.twitter.com/CIMicjoSA0

Virat Kohli who is known to be the most aggressive player on the field is winning hearts for the sweetest gesture ever:

[#SpiritOfCricket] Virat Kohli turned to the stand where Steve Smith was fielding in the deep & gestured the fans to cheer for him when he saw them booing Steve in a hideous manner. @BCCI @ICC @cricketworldcup #ViratKohli #TeamIndia #CWC19 pic.twitter.com/NbpXNoQXTn

Respect for Kohli 🙏 When Indian fans were chanting cheater cheater to Steve Smith, This was the reaction of Kohli.. #CWC19 #INDvAUS #ViratKohli pic.twitter.com/E3TVFKnxLx

Wow. How good is this from Virat Kohli? Steve Smith is sent to field on the boundary, and immediately cops the most hideous boos from the Indian fans. So Kohli turns to that stand and gestures for them to clap Smith. #CWC19 pic.twitter.com/GBTPaolOXh

Wonder Indian fans in the UK were booing Smith and the indian fans here in India were cheering crazy for both Warner and Smith in the #IPL19 .
But captain did exactly the right thing there. #INDvAUS #CWC19

I was there. Fantastic to see this from VK.

That's why I love this man. Extraterrestrial legend for a reason. Heart for you❤

Great sportsmanship earlier by Virat Kohli which was appreciated by Steve Smith – telling the Indian fans to stop booing Smith when he was fielding on the boundary #INDvAUS #CWC19 pic.twitter.com/fehhWKD0fn

Well done @imVkohli, a proper leader on and off the pitch and a mensch – criticising fans for booing Steve Smith and apologising to him on behalf of them.

Keep the game civil and nip this type of thing out quickly. #INDvAUS #AUSvIND https://t.co/GeiNihxz8k

Virat Kohli's gesture to the crowd to stop booing Steve Smith, was where India won the match for me ❤️
Respect @imVkohli ❤️@stevesmith49 is still a legend no matter what 😍#INDvAUS #ICCCricketWorldCup2019 #WorldCup @ICC

Kohli asked the Indian crowd to applaud Steve Smith. An excellent gesture knowing Kohli and Smith have had a lot of friction between them earlier. This was followed by a friendly handshake between them.

What a moment. You gotta love Virat Kohli. #INDvsAUS #CWC19

Steve Smith also thanked Virat for standing by his side!