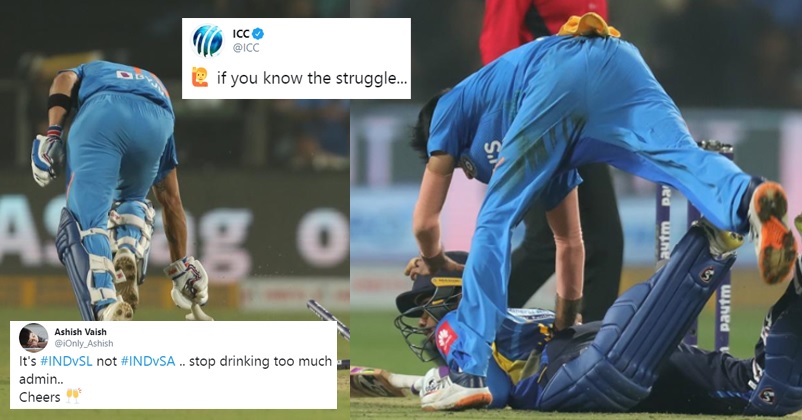 The Indian cricket team has recently won the three match T20I series against Sri Lanka by 2-0 and the first match was abandoned because of the rain. The Indian team proved its dominance over the opposition in a pretty comfortable manner in both the matches.

In the third match, India defeated the visitors by 78 runs as batting first, India put up a total of 201 runs on the board at the loss of 6 wickets. The Sri Lankan team got all out at the score of 123 and while the whole world was talking about it on the social media networks, the International Cricket Council (ICC) also made a tweet regarding the India-Sri Lanka series.

In this tweet, ICC posted two photos and wrote the caption, “If you know the struggle….#INDvSA”.

After this tweet, the Indian Twitterati was in no mood to spare ICC and trolled the organisation mercilessly. If you are still not able to see what is wrong, just take a look at the hashtag; ICC wrote #INDvSA instead of #INDvSL. Some users also gave reference to Bollywood actress Ananya Pandey’s famous struggle remark taking into consideration the caption used by ICC.

#INDvSL not #INDvSA, I think you are strugling with it…. 😂😂

It's #INDvSL not #INDvSA .. stop drinking too much admin..
Cheers 🥂

We appreciate your struggle of writing #SA instead of #SL

Some fool sitting in icc handle I guess…..and lover of Ben Stokes..

@ananyapandayy they are looking for you!!!

@daniel86cricket @IAHsWarrior ICC just doesn’t want to accept that there was SL vs Ind last week? Same as our expert @daniel86cricket who has been promoting Aus cricket team when they are not playing.

Ind vs SL(minnows)*
I think ICC admin is drunk nowadays.

IndvSL
Who handles your handle?

Sleepy admin due to over excitement refers SL as SA😜

India is all set to host Australia for 3 match ODI series starting 14 January 2020 at Mumbai and the remaining two matches will be played at Rajkot and Bengaluru. After playing against Australia, the Indian cricket team will leave for the New Zealand tour.