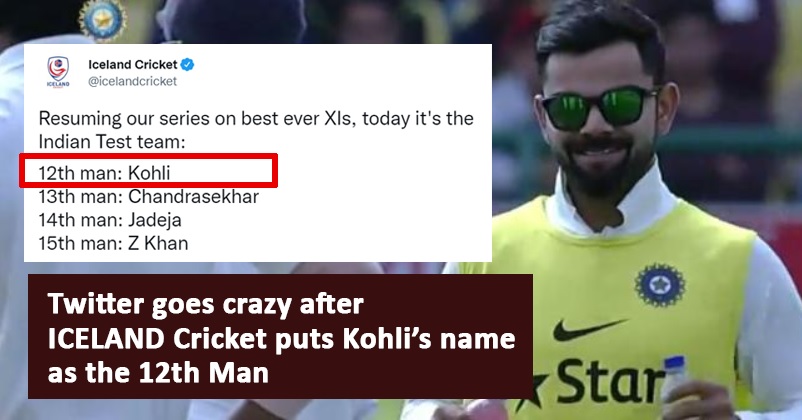 The Iceland Cricket may not have been able to make its presence felt on the international level as far as cricket is concerned but it is certainly making a big impact on the social media networks. Some time ago, its official Twitter handle posted a tweet in which it took a jibe at the Board of Control for Cricket in India (BCCI) for poor umpiring in the IPL, especially in the match between Mumbai Indians and Royal Challengers Bangalore.

In that match, Virat Kohli was given lbw out on the bowling of Dewald Brevis who is also referred to as Baby AB. Coming back to Kohli’s dismissal, after the on-field umpire gave Virat lbw out, he asked for a review and in the replay, it was seen that the ball touched the bat and the pad simultaneously. As per the rules, if such a situation occurs, the touch with the bat should be given the priority but the third umpire still gave Kohli out.

The Iceland Cricket used this as an opportunity to take a dig at the richest cricket board of the world and it tweeted, “It’s not easy for on field umpires to detect inside edges or whether ball hit bat or pad first. But every TV umpire should be able to make the right call with the benefit of slow motion replays and technology like UltraEdge. @BCCI We have trained umpires ready to fly over.”

It's not easy for on field umpires to detect inside edges or whether ball hit bat or pad first. But every TV umpire should be able to make the right call with the benefit of slow motion replays and technology like UltraEdge. @BCCI We have trained umpires ready to fly over.

The Iceland Cricket once again made a tweet regarding the Indian Cricket but this time, it has attracted ire of the Indian cricket fans as it kept Virat Kohli as a 12th man while making the list of India’s best ever test playing XI.

Resuming our series on best ever XIs, today it's the Indian Test team:

Keeping Virat Kohli as a 12th man did not go well with the Indian cricket fans as Virat Kohli is certainly one of the greatest of all times who has played 101 test matches and has scored 8043 runs which included 27 centuries and 28 fifties as well. The former RCB skipper may have given up his test captaincy but he is the most successful test skipper of India as under his leadership, India played 68 test matches and won 40 of them.

Check out some of the selected reactions by Twitterati:

Only Virat Deserve No-1 Spot if Test team is choosen.

This Iceland cricket Admin had Zero 0️⃣ Cricketing sense. It seems. @ICC No -1 is not in Their 11 🤣😂😂 pic.twitter.com/qMEBytgSBv

12th Man virat
Are u kidding me????
For test, he's place is cemented in the squad. I don't need to elaborate his stats. Any venue in the world.
It's a treat for eyes to watch him bat.

Sacrilege! Kohli is the first name after Gavaskar on the team sheet

Lol ,no place for kohli in test XI.
Mffs , Even if BCCI make all time XI ,they will put Kohli as Captain. Lodu iceland cricket.

World Best 💯 ever Top 4 Captain in History of 125 years of Test cricket Virat is Not Top -11 of India.

Iceland Cricket should apologize for this act. 🙏
Virat is World ever No-1 pic.twitter.com/tQtowsoEBG

Doesn’t Virat Kohli deserve a place in the playing XI? What do you have to say about the Iceland Cricket’s tweet? Share with us.