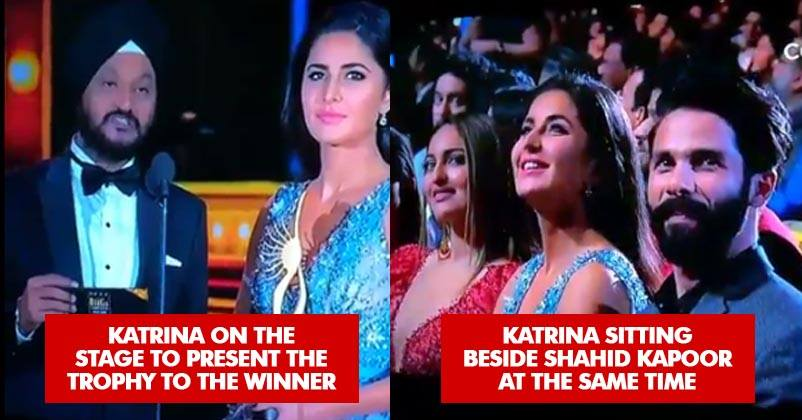 Fans of Bollywood love awards functions in the same manner as they love movies because they not only get a chance to see their favorite film stars performing on the stage but are also filled with joy when their favorite star gets an award. There is hardly any Bollywood awards function which is shown live on the television as it is very difficult to manage all the aspects of the show in real-time and hence, the television audience gets to see such events after some time of their actual happening. Editing plays a very important part when it comes to telecasting the awards show on television, as there is a time limit and it needs to be carefully decided as to what to be included and what to chop off.

In IIFA 2017, the award of the best actor male was given to Shahid Kapoor for his performance in “Udta Punjab” and when this announcement was made, Katrina Kaif was standing on the stage, holding the award. However, a video is going viral on the Internet which first shows Katrina on the stage and then in the next scene, she is seen sitting next to Shahid.

And the best editing award goes to… pic.twitter.com/tQQwJ69zPg

Editors have made a blunder this time and given enough fodder to Twitterati to rip them apart. Check out some reactions:

This editor deserves an Oscar:

They deserve Oscar 4 this….😂

Laugh how much you want to, but it is secretly Mr. David Dhawan's style of starting his promotions for Judwaa 2. Hats off sir!! @Varun_dvn 🙏

Thank God Shahid was not on stage 😂😂

Katrina is so fast:

This editor got job through reservation:

Somebody is going to lose his/her job.. 😄

Haha.. This was very bad.. This ywar @IIFA was like school awards gathering show.. In fact school awards show are better than this.

And the best editing award goes to….

: "And the best editing award goes to… pic.twitter.com/dSLFHMKgYD" #1 in #India https://t.co/DL7PjmbcIg

Don’t underestimate the power of an editor:

Only an editor can do this…:)
Don't underestimate the power of a common Editor. #jaduoncuts #IIFAAwards2017

Got to recall Gormint Aunty:

A jibe at Sasural Simar Ka:

Looks like a bjp bhakt was involved in that editing, as they are known for photoshop/fake photos n videos etc haha

This is why Aamir Khan doesn’t go to awards functions:

Damn hilarious! What do you have to say about this out-of-the-world editing?