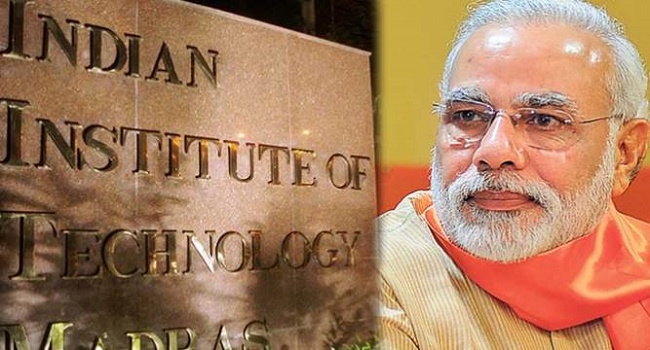 News comes from Chennai where a controversy seems to have taken place in IIT-Madras which puts a ban on the discussion forum for students in light of a complaint according to which it has made an attempt of spreading “hatred” against Narendra Modi, PM of India by assembling SC and ST students for raising a question on govt. policies regarding usage of Hindi language as well as beef ban.

The conclusion followed subsequent to the investigation by MHRD (ministry of human resource development) on the subject of unidentified complaint about APSC’s students. Along with the complain was enclosed a pamphlet of Ambedkar Periyar Student Circle replicating the speech wherein govt. of Modi in addition to their policies had been condemned. On 15th May, Prisca Mathew wrote a letter to IIT director, “I am directed to forward herewith a copy of anonymous letter alleging serious complaints received from students, IIT-Madras along with pamphlet issued by Ambedkar-Periyar study circle on the above mentioned subject and to request that comments of the institute may please be sent to this ministry at an early date.”

On 24th May, after one week, Sivakumar M Srinivasan, IIT dean, mailed APSC coordinators to inform about their being “derecognized”. Presently, APSC members are angry and feeling offended on account of action taken by HRD ministry together with a ban on their behavior & actions imposed by IIT’s decision and this all on the basis of a complaint.

According to an APSC member, “We object to the fact that the dean has derecognized our study circle unilaterally without giving us a fair hearing and an opportunity to represent ourselves. In our interaction with the dean of students, we have been told that our study circle engaged in “controversial activities” and violated the code of conduct of independent student bodies. We are clear in our stand that we have not misused any privileges given by the institute.” Srinivasan justifies his decision by maintaining, “There are certain procedures to be followed and in this case, the APSC has broken the basic code of conduct. They have misused privileges given to them. So the action was inevitable.”

As per the dean, after he received the letter, enquiry was carried out as a result of which it was discovered that “the allegations were true”.

What are your opinions regarding this whole issue? Who do you think is just and correct? Share your views about the matter in the comments section below!

Son Of 17 Grew Hair On Moustache & Chin, Father Threw Lavish Party To Celebrate His First Shave
‘Spy’ Pigeon From Pakistan Landed In Pathankot Jail – Everything Is Possible In India