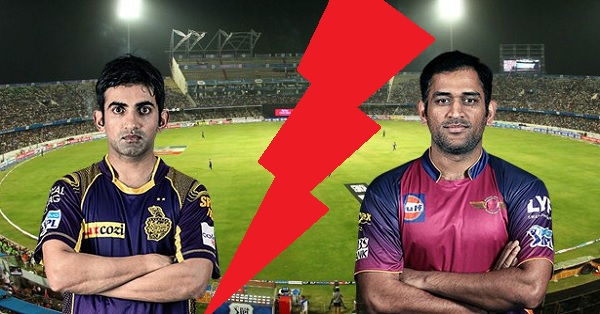 Gautam Gambhir and Dhoni’s rivalry is known to every cricket fanatic in India. But the level of bitterness has increased to such level where Gambhir tries to get into Dhoni’s skin every time Dhoni comes on to bat.

There have been several instances caught on tape where it was clearly evident that these both players doesn’t share a warm relationship. Be it last year’s incident in a Vijay Hazare Match where media reported that Gambhir ignored Dhoni after the match and didn’t shake hands with him. To which, Gambhir reciprocated through a tweet giving proof that both players indeed shook hands. Another story which proves their tension is when in 2012 India lost back-to-back test matches against England in home series.

It was then, Dhoni complained to BCCI about Gambhir’s attitude and on-field ethics. He stated that, the opener has gone selfish and has been keeping his interest above the team. According to the complain, the opener was tagged as self-centered and his batting approach as hurtful to the team.

Well, so many reports can’t be false and which makes the story of clash between these two players quite true. The field placement Gambhir keeps when Dhoni is on strike is just to get into his nerves and this has been going on from last year. It would have been called a perception if it was a test match but to keep forward short leg, silly point and short cover in a T20 and an ODI Match. This is more than cricket and its been personal since many years.

What is your say on the story. Let us know in the comments section below.

Continue Reading
You may also like...
Related Topics:These Images Prove That Gambhir Doesn't Like When Dhoni Comes To Bat

Was Mohammad Azharuddin The Reason Why Sachin Tendulkar Quit Captaincy?
A Match Where Manoj Prabhakar and Nayan Mongia Played Villian For India