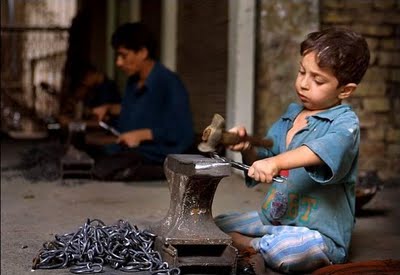 This video features a hungry kid of 5 years old who was standing outside McDonald’s and looking through the window. It would come to you as a surprise cum shock that he is the only earning member in his family. His mother has fever and his father is no more. He sells pen and buys food for himself and the family from the money he earns like milk worth Rs. 20, sugar of Rs. 2, Tea leaves worth Rs. 2 and flour of Rs. 20. The kid is being taken inside McDonald’s by a generous man who orders enough edibles to satisfy his hunger. On the man’s asking, “You don’t go to school?”, the kid innocently says, “If I go to school, how will I feed myself?”

This really compels us to think about the condition of a large number of population, where children are forced to work to live because if they don’t work, they won’t get food and will die. Now a prominent question arises, which is more important – to study or to live? So next time, when you see a child engaged in any labor, don’t just instantly make a statement about their mentality and not making children educated because if they are busy in getting themselves educated, who would feed them? You? Or will government take the responsibility of them and their families to whom they are the only breadwinner?