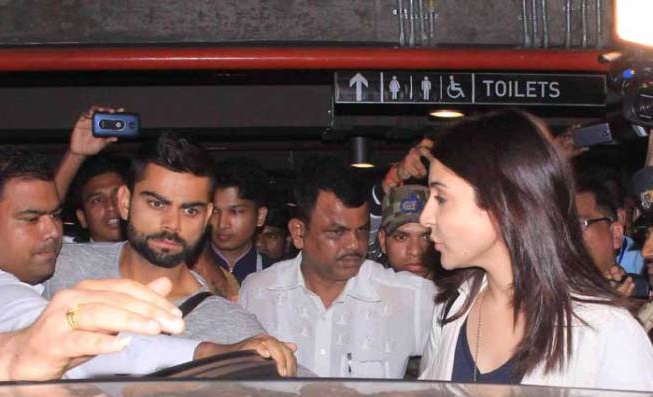 Inspite, the defeat of India in the Semi Final of World Cup Championship and no show by the most promising cricketer Virat Kohli, the love between the cricketer and Bollywood actress Anushka Sharma seems to have been least hampered. No doubt we are happy about it. After all, a match won or a match lost never should be the determining factor between a couple. When we have seen some of the top actress of Bollywood dumping their boyfriend after they hit a rough patch, we are really more than happy to see standing by his man with armour no matter what.

Anushka Sharma, WE are proud of you. Be the way you are. A support system. because we might not now what the Virat must be feeling after the lost, but at least you can extend your love and support to make him feel better. Way to go gal.!! In the picture you can see the supportive girlfriend. All support extended, and defending like a wall.. We love it While Leaving the airport. It is truly great to see the couple holding hands and coming back and standing for each other.