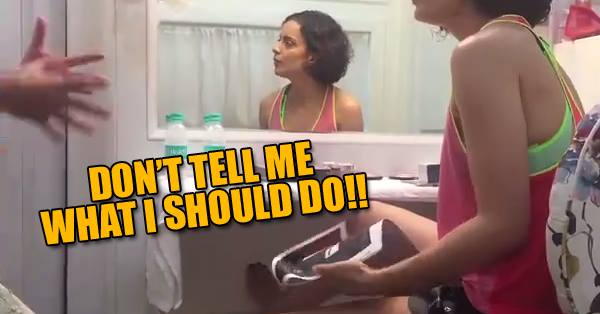 Kangana is quite popular for being a fearless actress and gives her frank opinions on literally any topic.
A leaked video of this actress has gone viral! Would you like to see it? Well, this video features Kangana on the sets of her movie in vanity van, when she suddenly lost temper and got furious.

In this video, the conversation between her and a guy, who seems to be the assistant, is captured.
The boy says that they wanted to use body double, on which Kangana says ‘What body double? I don’t work with it!’ After this, the boy says that it would be quite troublesome for them. Kangana lost her temper and became furious as she wasn’t informed about the same. Within few seconds she calls out for Rangoli and the discussion turns to a heated one. Kangana just keeps yelling at the guy in this video. Watch the video below:

This Twitter Conversation Between Uday Chopra & Ayushmann Khurrana Will Make You Go WTF
Shocking! Government Sends Out Letters To Wives Of Govinda, SRK, Ajay Devgn And Arbaz Khan! Check Out Why!