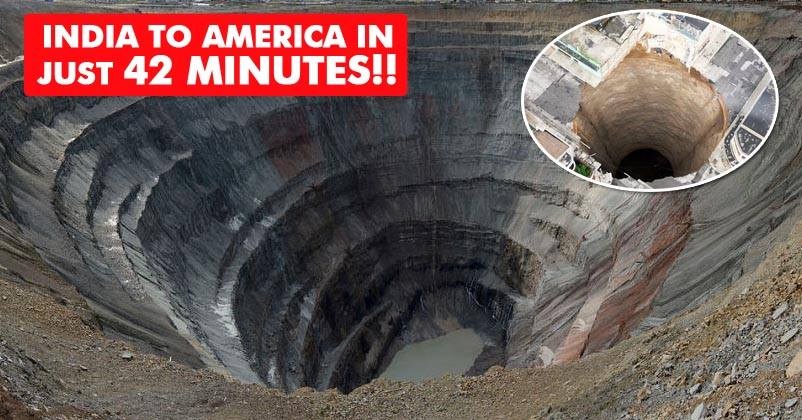 Suppose you have a spherical or circular ball and you drilled a hole from one side till it reaches the other side. The time taken to reach the opposite side of the ball from your current position covering its circumference will be more than the time taken if you jump into the hole which you drilled previously. See the image for understanding the above point. We knew that Earth is spherical in shape. So after understanding the above point a new question arises – “Can we dig a hole into the earth’s surface from one side to another side? And if we succeed how long will it take to reach the other side if we jump in it?” – Well, scientists have been thinking about this for nearly half a century and came up with the answer as 42 minutes and 12 seconds. However, this is practically impossible as the earth is surrounded by gravitational force, it has high density, air resistance and temperature at the center of the earth is close to 6000 degree Celsius (10,800 F). This concept of drilling a hole in the form a tube from one side of the earth to another side from the center of the planet is known as “gravity tunnel”

Let’s be optimistic if in case we are able to get rid of Earth’s gravitational force, air resistance, high density and can dig a hole and jump into it right from the center of the Earth withstanding 6000 degree Celsius , then guess what we can reach the opposite side of the world in just 42 minutes. Sounds unreal but this can happen in future. Below image tells us that if we will dig a hole from Center of India i.e. Madhya Pradesh state then we will land somewhere near South America in Pacific ocean. If we are successful in drilling a hole from India, we will end up somewhere as shown in the image but not America exactly.

This video explains it more clearly:

Let us know whether we will be able to make this gravity tunnel in future or it’s something that is impossible? Share your views in the comments section below.

Father Caught Daughter Eating Non-Veg During Navratra. What He Did Will Shock You
Watch R Ashwin Got Trolled By MS Dhoni & Virat Kohli In This New TV Ad