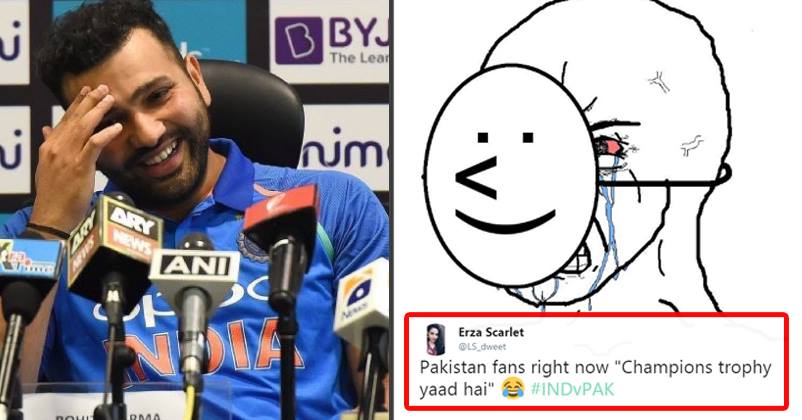 Today’s match between Pakistan and India was indeed an interesting one. Both the teams put in equal efforts but it was India who enjoyed victory at the end.

Pakistan scored 162 runs, thereby making the chase easier for India. Sarfaraz Ahmed opted to bat first in the toss; however, looks as if decision was not right as India could chase the total smoothly and that too for the loss of just 2 wickets. On the other hand, Pakistan got all out in 43 overs.

Rohit Sharma and Shikhar Dhawan played really well. The target was achieved in 29 overs itself. Bhuvi and Bumrah bowled too good and in the first 5 overs itself, they took wickets of the openers.

Everyone is trolling Pakistan for such a humiliating loss. They not only lost wickets fast but could also not make many runs.

Here are some trolls;

Sarfaraz: Our balling was good but our batting was less good so we not play good so our team perform bad
Rameez Raja: Abay urdu mein bol
Sarfaraz: Waj gai hai pic.twitter.com/gFrfhPWXpl

Don’t get disheartened Pakistan. I know its not easy to be the son of a successful father.#IndvPak

There is always clean sweap, when our oppostion is Pakistan!!!
India win comfortable against our arch revals #INDvPAK

Congratulations Pakistan India most importantly your dad won the match 😂

In 2030 India defeated Pakistan badly and Pakistani fans be like….

Well, Pakistan got badly trolled for this loss. Hope they will improve and play better next time.

PCB Tried To Troll India In Its Tweet. Got Badly Trolled By Indians For Wrong Spelling
Rohit Sharma & Sarfraz Ahmed Took A Dig At Bangladeshis In This Hilarious Video