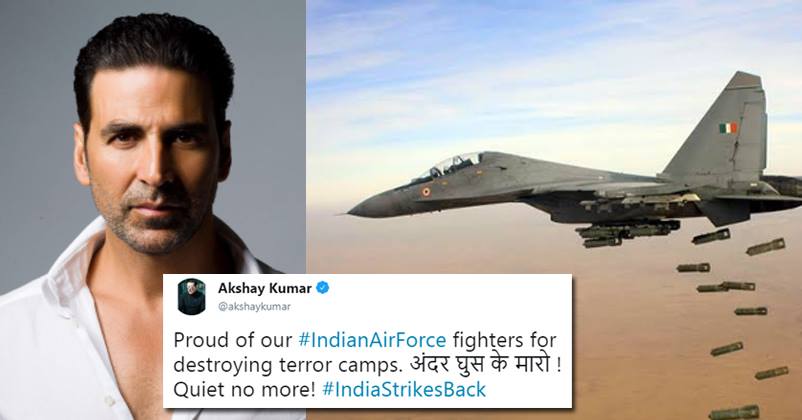 After nearly two weeks of the Pulwama tragic incident, Indian Army avenged Pulwama martyrs and proved what it takes to fight back. According to Indian Air Forces a group of Mirage 2000 Indian Fighter Jets released thousand kg bombs on the militant camps across the Line of Control.

The targets were neat, they wanted to destroy the JeM training camps and control rooms across the LoC border.This is the same militant group that claimed responsibility of the Pulwama incident, in a video that went viral soon afterwards.

According to sources the terrorist launch pads are completely destroyed in Balakot, Chakoti and Muzaffarabad. Even JeM’s Alpha-3 control rooms are no longer there.

India successfully carried out this mission at around 3:30 this morning and made sure they are doing exactly as planned.Today our Prime Minister Narendra Modi will be meeting the top ministers to discuss about security forces in the cabinet committee.

The moment our nation woke up to the news which is this great they took to various social medias to express how grateful they are for this prompt action. They saluted the bravery and applauded like never before.

Mess with the best, die like the rest. Salute #IndianAirForce.@narendramodi.

Glad to know that #IndiaStrikesBack #Surgicalstrike2 against terrorists didn't result in any innocent civilian casualties there. Our #IndianAirForce was careful and particular abt their target and mission.. Heroes 👌👏 #Balakot

Great job by the #IndianAirForce. The #IAFStrikes have sent the much needed signal to Pakistan and the terrorists it’s harbouring – don’t think you can get away with acts like the #PulwamaAttack. Bravo to the #IAF men and my full support for the action.

1000 kgs bombs dropped on terror camps with pin point accuracy. Forget about camps being destroyed.
After #Pulwama some sick minds asked us a question, laughing at our grief. Today, we ask them that same question.
Now say…#Surgicalstrike2 #indianairforce #HowsTheJaish.. pic.twitter.com/sTiCOVeeyI

Salute to the Indian Defense Organizations and the Government for showing the world that well will not keep quiet anymore.

How is the JOSH.

Well 350 kg was their limit, our beginning is with 1000 kg. Their capacity was mere a car, ours is MIRAGE fighter aircraft. #SurgicalStrike2 #indianairforce pic.twitter.com/BHli82Y6Oh

Just to make it clear, unlike the previous #SurgicalStrike we didn't just cross the LoC, we went beyond into Pakistan's Balakot, dropped 1000 kg bomb, destroyed JeM Terror camps and came back safely. Kudos to #IndianAirForce 👏🙌🇮🇳 #Balakot #SurgicalStrike2 #IndiaStrikesBack pic.twitter.com/eaXcgdbstN

INDIA is no more a Soft State ! This is new INDIA 🇮🇳 #indianairforce #Surgicalstrike2 #Balakot pic.twitter.com/OV1Xvgbpml

None of us can imagine the guts the #IndianAirforce pilots had when they attacked the terrorists in their own land.🙏🇮🇳🇮🇳😎

You are the reason why I am tweeting without any fear because I know all the Armed Forces are guiding us 24 hours.🙏🙏

I salute our fighters of #IndianAirForce for carrying out the cross-LOC strike and destroying terror camps in #Pakistan Hats off to all of you. Lots of Josh! @IAF_MCC #IndiaStrikesBack

You keep sleeping, we will strike you in your beds because PAF is awake to watch you getting hit. 😁 😁 😁 😁

If our 12 aircrafts can hit your periphery and return unharmed, our missiles can easily strike ur heart. 😁 😁 😁 😁

This is not #surgicalstrike2.#Balakot is in Khyber Pakhtunkhwa, just 60 km from Abbottabad, where Osama bin Laden was killed.
Indian Mirage 2000s have struck deep in the heart of Pakistan.
This is a full-blown attack. #IndianAirforce #IndiaStrikesBack

So, how is your josh this morning?