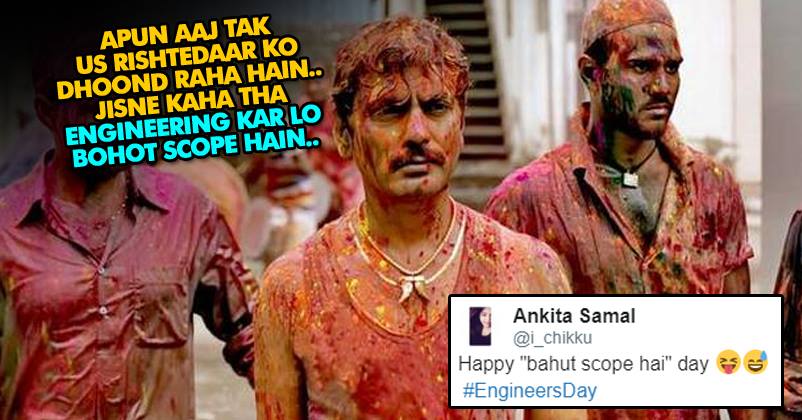 Today is 157’s birth anniversary of the father of engineers M. Visvesvaraya, who was world’s renowned Civil engineer. He was so devoted towards his life of engineering that his birthday is celebrated as Engineers Day. Google also decide to create a doodle to pay tribute to him. Every year India celebrates Engineer’s day on 15th September and for his numerous industrial, economical projects he was called “Father of Modern Mysore”.

Here is the Google Doodle

And today India is celebrating Bharat Ratna awarded M. Visvesvaraya’s birthday, some people are tweeting and appreciating his work,while others sharing some hillarious experiences of their engineering life through their touches of humour

Here are some tweets

I guess the phrase:-
'HAR KUTTE KA DIN AATA HAI' was actually made for "Engineers Day"#EngineersDay

The four years of our life we had spent in the hope of good future and eventually we end up on Twitter to spill out our dil ki Bhadaas.

[Remembering Biplabji's words of wisdom on this #EngineersDay]

Happy "ENGINEERS DAY" to all the Singers, Actors, Musicians, Writers, Photographers, and RJs as well….😛🤣🤣😂#EngineersDay

Engineer of the year, level checking with available resources🤪#EngineersDay pic.twitter.com/11ELlzt8Ev

“Strive for perfection in everything you do. Take the best that exists and make it better. When it does not exist, design it.”
—Sir Henry Royce #EngineersDay I can definitely relate to 👇 pic.twitter.com/kUDPQRVZL9

Me and my team reaction before leaving to native for long weekend leave… ” Pls don't do any stupid things and don't spoil my holidays” #EngineersDay pic.twitter.com/fwqUxv9Duy

Aww, so Much truth in one pic

Life of an Engineer

Being an Engineer it hurts , but that's the truth of today's situation of #Engineering field.
Never regret though.
"We are the best"#Engineers #EngineersDay pic.twitter.com/QkWY0chzkg

In our country if you throw a stone in the darkness it will hit to a dog or an Engineer.😅🤣
We are everywhere 😎
Happy #EngineersDay