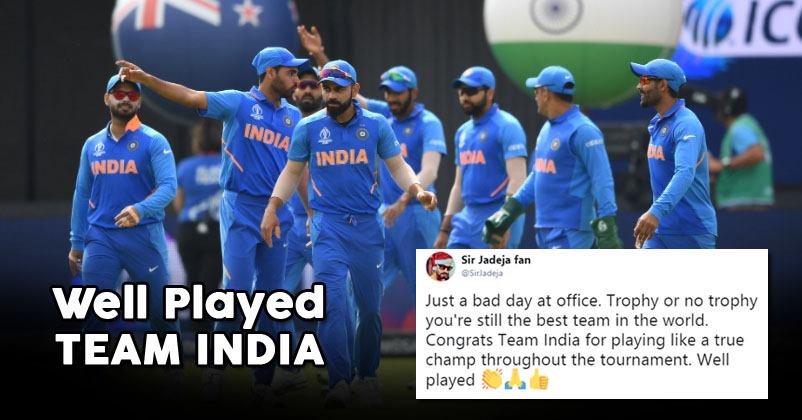 It was heartbreaking for all of us to see India lose today. After a brilliant series, with only one loss against England, India did it. They might not have won the semi-finals but they sure did win our hearts. India was battling New Zealand for the first semi-final of the World Cup 2019 series. The match was scheduled yesterday and was interrupted because of rain.

The match continued today and India had to make a total of 239 runs to win the game. But with the loss of 3 wickets back to back, things seemed to get tougher for the team. There was a ray of hope that came in between for the team when Jadeja and Dhoni hit it off and made a partnership of 100 runs. But when Dhoni left the field, people’s expectation to win the match left too.

Nevertheless, our Men in Blue fought hard and gave a nice fight to the New Zealand team. Though India lost the semi-finals, they won our respect and love. People are still supporting the team and thanking them for this amazing journey till now! Have a look :

#INDvsNZ
Don't cry Legend, Wherever you will be we will always support you.
Love you Dhoni ❤️❤️3000 times pic.twitter.com/ZNLPTsc9NW

“Rishabh is very young. I made a lot of mistakes when I was young. He is a very good cricketer and will come out strong.” – Virat Kohli in PC #INDvsNZ

We are super proud of you Team India you played fantastically in the world cup tournament. Today was not our day sadly.

Some people will judge you by these two pics.

But the real story is in between.

We played really well… We lost that is part of game.. cheer up#INDvsNZ pic.twitter.com/GqNvjg4oPU

Only common fans of these two can understand the pain behind these pics💔 #INDvsNZ pic.twitter.com/5Pd3ExgJ4f

Yograj Singh Says Yuvraj Deserves To Be The Captain, Accuses MS Dhoni Of Rayudu’s Retirement
Sanjay Manjrekar Takes A Dig At Jadeja After His Outstanding Performance Today, Gets Schooled By Fans