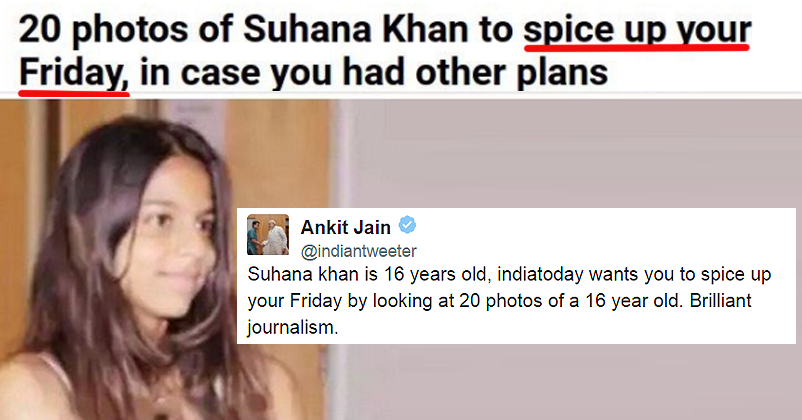 Gone are those days when reporters used to take care of journalistic standards. Nowadays, things have changed a lot and journalists have become TRP-hungry. Yes, owing to the TRP game, media houses have started believing only in hot gossips and masala news. But amidst all that, they forget that readers want something nice and subtle. “Clickbait journalism” is the new trend these days, and media agencies are ready to do anything for the sake of getting clicks and traffic.

However, it is good that people raise their voice against such pathetic journalism. Recently, India Today was slammed for its insensitive piece on SRK’s daughter, Suhana Khan. There was a story on India Today website, titled “20 photos of Suhana Khan To Spice Up Your Friday, In Case You Have Other Plans”, how insensitive is that! Here’s the screenshot of that story… Suhana is just 16, but just because she’s the daughter of King Khan, India Today used such a title to garner some views. Has the media forgotten the importance of “Respect”? Just because she belongs to the star family, does media get the right to report crap?

As soon as this article became viral, some Twitter users slammed India Today; check out their tweets…

Don’t use her for cheap news!

Use MDH masala to spice up your Friday, not #SuhanaKhan's photo! @IndiaToday

@IndiaToday what the hell? You use such lines for a 16 yr old? Horrible! #SuhanaKhan. This is sick and cheap! Yuck, Chee, thoo @iamsrk pic.twitter.com/EOUmsuKfmK

Suhana khan is 16 years old, indiatoday wants you to spice up your Friday by looking at 20 photos of a 16 year old. Brilliant journalism. pic.twitter.com/IED46imDyN

After being slammed, India Today changed the headline of that story to “Flashback Friday: 20 Photos of Suhana Khan That Will Make You Look Forward To Her Bollywood Debut”. It’s good that people openly opposed such shameless journalism; Suhana is a teenager and should be given the due respect she deserves.

Next time, India Today will have to carefully select the headlines, to avoid being brutally thrashed on social media.

What’s your take on this? Share your views in our comments section below.

SRK’s Childhood Friend Shares Memories From His Struggling Days! SRK Fans Will Love The Video!
2nd Day Collections Of Naam Shabana Are Out! Akshay’s Magic Has Worked On Saturday!