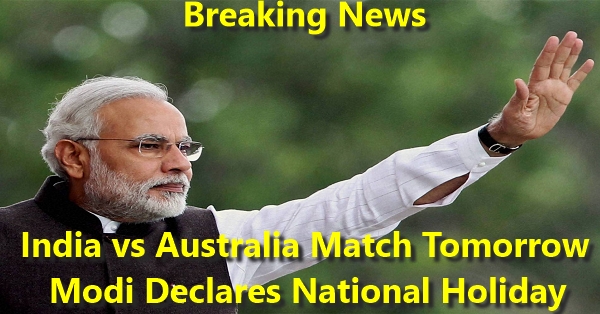 As we all know, World cup series is going on and India’s performance has been commendable throughout. But the most exciting part of the series is yet to come.

The prime minister of our country, Mr. Narendra Modi, has declared a national holiday on 26th march, i.e tomorrow, so that nobody misses the historical event. He is so serious about his decision that he has threatened all the CEOs of India to snatch away their licenses if any of their employees are found working.

“Nobody will work on 26th march. I will make sure of that. I have installed 15000 CCTV cameras in order to keep a check on this one”, says Modi.

The CEO of Infosys is so excited and agitated, pumped up with adrenaline that he said that he will not even let his security guards work on 26th March. “Nobody will work. Ramu kaka will be sent home if he comes. Batti devi will also be on leave along with his son Tumbu lal.”

The Chief Executive Officers of IBM, Microsoft, Orient Craft, Kingfisher and Cadbury were found posting banners and slogans on Twitter and Instagram to cheer the Indian Cricket Team.

Students from IIT and IIM had already planned for mass bunk but with this news they are very excited and are planning to bunk on 27th March to prepare themselves for Final match on Sunday. Everybody has gone insane about the match.

Whatever it is. We can’t wait for the match to begin.