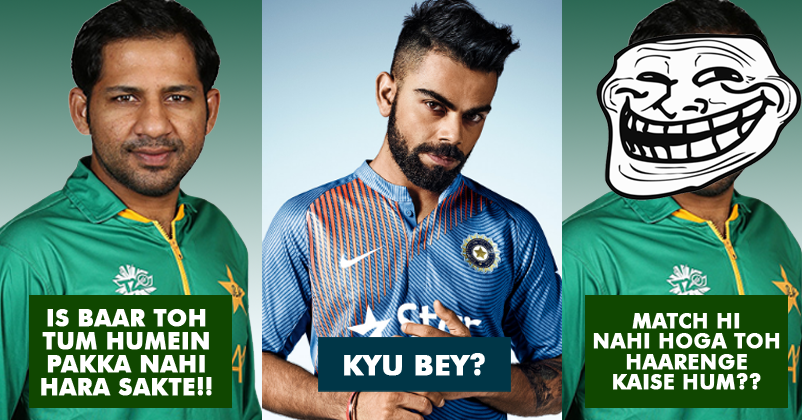 We all know about the India – Pakistan match that is scheduled on 4th June. The game is to be played at Edgbaston Cricket Ground, England. All Indians are going crazy over it and now, internet is booming with funny memes. This is giving the “Asli-Dangal” feeling!

We surely are waiting for the classic Indo-Pak match and the excitement just increased after its active promotion. But we have a bad news for you. We think that the match might be cancelled. Read the complete article to know why.

As mentioned above, the match will be played at Edgbaston Cricket Ground at 10:30 AM (Local Time, BST) which will be 3 PM Indian Time. Although we are very excited to see the match, seems like mother nature has other plans. Weather forecast report of 4th June says that it is going to rain from 10 AM to 6 PM. Even today, the match between Australia and New Zealand was disturbed due to uncalled rain showers; finally the match was abandoned with both teams getting 1 point each. It looks like the fate of Indo-Pak might be the same. After we saw this weather report, we thought to verify the forecast. So we cross-checked the statistics with other websites and here’s the report from Weather.com After looking at the reports, we can estimate that the match is most likely to be called off. According to the reports, it will be raining for the whole day except from 1 PM to 3 PM, although it will still be cloudy. And we all know that it is almost impossible to conduct the match in 2 hours.

For now, the only thing we can do is to cross our fingers and pray that this forecast proves to be wrong, which is highly unlikely to happen. Do let us know what you think about it.

As Soon As Kumble Came, Virat Walked Out Of The Nets! Things Are Turning Even Bitter?
This New “India Pakistan” Video Has Raised The Heat! We Can’t Wait For Tomorrow’s Match Now!