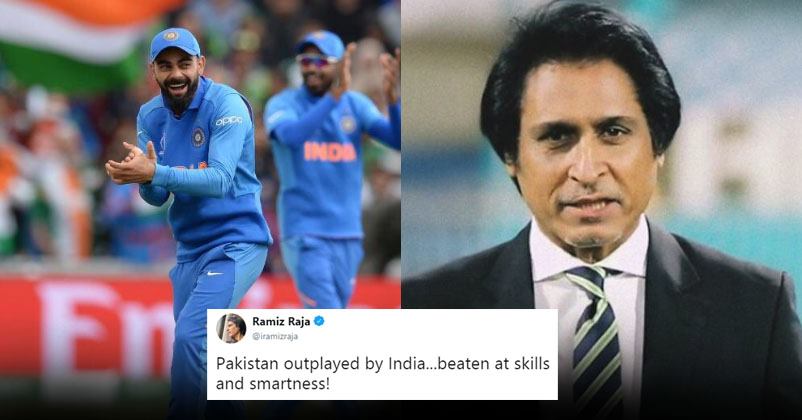 The India-Pakistan match was the talk of the globe last night. Every Indian, as well as Pakistani, felt the adrenaline rush and excitement too high to explain. While two nations were stuck in front of the television to find out which team is going to win the most anticipated match of the ICC World Cup 2019.

India smashed their neighbouring country Pakistan and defeated the rivals by 89 runs through DLS at Old Trafford. India scored a total of 336 for 5 which includes magnificent innings of Rohit Sharma’s 140 runs, Virat Kohli scored 77 runs and KL Rahul made 57 runs.

Le Indian Fans:
After Jija Shoaib Malik Gets out for a Golden Duck..#PakVsIndia pic.twitter.com/KIajekNaJv

rohit looks like #Abhinandan in this match for pak fans and team #PakVsIndia pic.twitter.com/YmvmLVs7yt

This is how you play cricket in Pakistan. #PAKvsINDIA pic.twitter.com/3TpxDMQRwb

#PakVsIndia #baapbaaphotahai #Shankar FIRST BALL #WICKET
#Pakistan If you want to look that ball you go and brings the #3dglasses ☺☺ pic.twitter.com/0ep3WdkECa

Cricket fraternity was busy alluding the dominance team India portrayed on the field:

The boys played really well.
As easy as it comes #IndvPak pic.twitter.com/JPDivVCYgP

Resounding. Convincing. And an empathic win. Well done Team India. May the momentum continue to be with us #PakvsInd pic.twitter.com/eXfaM0FDXO

Congratulations to @BCCI on a well deserved win today. The standard of cricket being played has been exceptionally high & credit goes to IPL for not only helping identify & harness talent, but also in equipping younger players with pressure handling techniques #CWC19 #PAKVIND https://t.co/MfiwQxwjrK

Pakistan outplayed by India…beaten at skills and smartness!

A very professional display by #TeamIndia. Top job by @imkuldeep18 and @hardikpandya7 for the wickets. Rain can’t be predicted but Team India has checked all the boxes. Well played, lads. #INDvsPAK #CWC19 pic.twitter.com/htuKH1lIQJ

Once a baap always a baap!