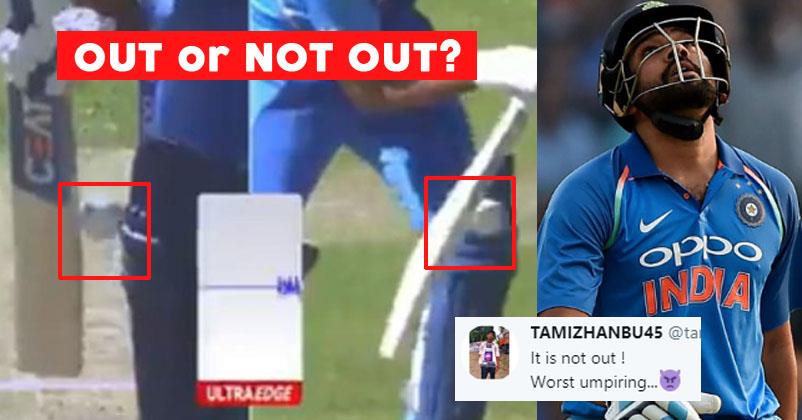 Another case of controversial umpiring came up during the India vs West Indies match at Old Trafford in Manchester. Kemar Roach was bowling and Rohit Sharma was behind the bat, while one of the deliveries had Rohit split open. The umpire gave not out but West Indies captain Jason Holder made an appeal to the third umpire.

It was visibly a wrong decision which left Rohit as well as his wife Ritika Sajdeh in shock. Rohit gave an ironic smile while walking out of the field. He was clearly disgusted and disappointed by the decision. This made Indian fans also angry and they started slamming the poor umpiring and ICC.

Just curious, how is that conclusive evidence that the ball hit bat first and not the pad? There's enough doubt there, no? Shouldn't the umpire be sticking with the on-field decision?#INDvWI #CWC19 pic.twitter.com/Uu3YKS3a4Z

Rohit Sharma given out caught behind on the review. Looked like ball made contact with pad. #CWC19 #INDvWI

For once I'm not convinced by that third umpire decision. Rohit Sharma wasn't either.

Third umpire sure was in a hurry for that Rohit call. No confirmation of whether that was bat or pad. #INDvWI #CWC19

That review against Rohit ,definitely was not conclusive as the umpire mentioned on air…. soo… much for technology 🤷🏻‍♂️ #INDvsWI #CWC19

Ok, I think that hit the pad and not the bat! Rohit not happy about it! #INDvWI #CWC19

Full sun on the ball, in the picture, on the right frame. Ball has hit the pad not the bat. Technology making the world a clearer picture, NOT!
Rohit has to accept the umpires decision, ctrl+alt+delete!#cwc2019🏆… https://t.co/FXRgzrFcMv

Clearly touched the pad first but might have hit the bat too. But umpire was so quick to give Rohit out, should have looked in slow motion. Even the on field umpire was confused!! pic.twitter.com/pBVXoeTurx

Wait a minute, @ICC didn't arrange for hot spot which would be definitely available for the Ashes a month later? Ridiculous. This decision will be cleared up by hot spot easily.

That was an unbelievably poor decision. The 3rd umpire has the time and the angles to be sure. He is supposed to be certain to overturn.