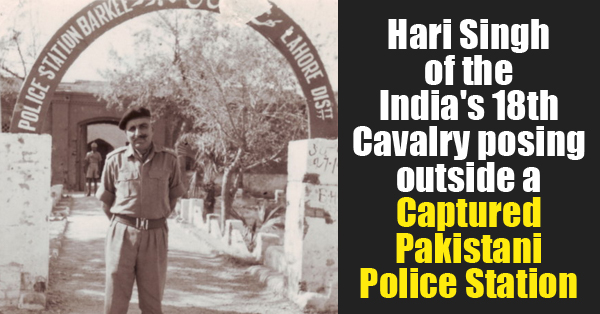 The year 2015 marks the 50th anniversary of 1965 India-Pakistan War. With Modi led NDA government deciding to celebrate the great victory over Pakistan in 1965 war, a new book has been unveiled last month named “India Won The War”.

Lets take a closer look at How India Won The War Against Pakistan in 1965:-

1. The origin of the war go back to the late 1950s when Pakistan received massive arms from the USA ostensibly to deter the USSR. Pakistan got arms from China as well and all these weapons wereused against India. 2. By April 1965, Pakistani were roaming over Indian territory over Rann of Kutch, the captured diary of a downed Pakistani Pilot seen after the war showed that he had conducted practice runs over the Indian Air bases of Adampur, Alwarah, Ambala, Pathankot and Jamnagar. 3. By August 1965, Pakistan initiated Operation “Gibraltar”through which thousands of armed men in civilian clothes were to be infiltrated into Kashmir. According to captured documents, the infiltrators motive was to instigate the population of Kashmir into rebellion so that the Pakistani army could roll into Kashmir.

4. To Pakistan’s dismay, the Kahmiris’s did not revolt.In fact, a man named Muhammad Din reported the presence of Pakistani infiltrators to Police. 5. The Pakistani’s were rounded up and arrested and huge quantities of arms and ammunition were recovered, some clearly marked as POF which clearly stated as the mark of Pakistani Ordnance Factory. 6. In order to take pressure off the infiltrators in the area of Mirpur, Tithwal and Haji Pir. In August 1965, Pakistan launched a massive assault further south in the Chhamb region near Jammu. However India concentrated in the infiltration roots in the North by climbing up mountains and capturing the passes. 7. The image of Indian soldiers after capturing and hoisting Indian Flag on the Haji Pir Pass. 8. On September 1st, 1965 Pakistan launched Operation Grandslam which was an all out war with India with offences in the Chhamb region threatening to cut out Jammu-Srinagar highway thereby isolating Kashmir from the rest of India. 10. Pakistan also para dropped several commandos who hid in fields and were rounded up by police assisted by Punjabi villagers, and then enjoyed the hospitality of Indian Army.

11. On the other hand, India was under great pressure in the Chhamb sector near Jammu. On September 6th, India launched attacks into Pakistan near Sialkot going towards Lahore where Indian troops made rapid progress by over running Pakistani defenses and capturing the town of Barkee on the outskirts of Lahore. 12. The Indian advance was halted at DRB Canal when Pakistan defence forces blew up the bridge ensuring neither side could cross over. 13. This set the stage for the Battle Of Asal Uttar, south of Amritsar. A Pakistani tank thrusts from Kasur entered India into the waiting Jaws of Indian defenders. Indian tanks and anti-tank guns arranged in a semi-circle picked off attacking Pakistani tanks like flies as they were slowed down in soft mud, that was arranged by secretly flooding the area. 14. More than 100 Pakistani tanks were destroyed and leaving that area which was later named as Battle nagar. 15. Going further south, Indian troops advanced into Gadhra City in Sindh Pakistan. The air-battle there started with some Indian losses. Three vampire jets were shot down and some were destroyed on the ground in Pathankot. 16. Afterwards, IAF got into top gear with closed air support air crafts destroying dozens of Pakistani tanks and vehicles over the battlezone. 17. In the end the war ended with a whimper. Ayub Khan the then Pakistani dictator’s pre war gloat was wiped off his face as Pakistan’s plan for taking Kashmir were dashed. India ended up holding more Pakistani territory (1920 sq km) than Pakistan had captured (550 sq km) . 18. On September 16th, 1965, the then Prime Minister of India Dr Lal Bahadur Shastri wrote a letter to the then US president Lyndon Johnson informing him that India agrees to an unconditional ceasefire. 19. After the intervention by Soviet Union and US, the war ended with a ceasefire on September 22nd, 1965. Thousands of causalities were reported by both countries on both sides of the border.

Share your thoughts in the comments section, about India’s Victory over Pakistan in 1965 war.

Continue Reading
You may also like...
Related Topics:India, india pakistan 1965 war, Pakistan, These Historic Pictures Which Will Make Every Indian Proud