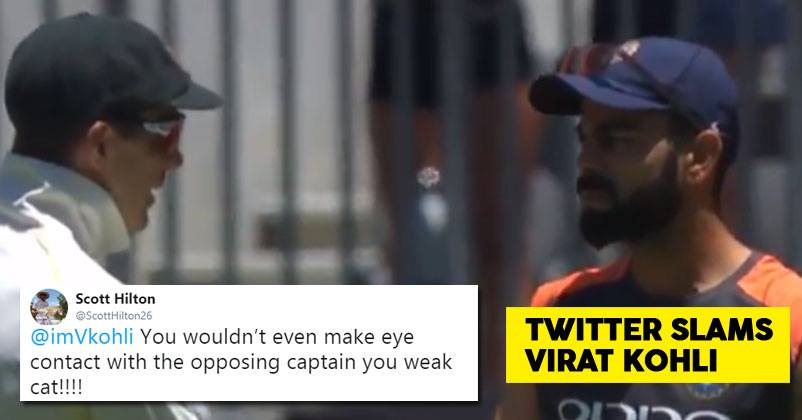 The controversies in the latest India versus Australia series don’t just seem to end. And unfortunately, Virat Kohli has been at the centre of most of them.

In fact, Tim Paine and Virat Kohli’s heated argument was the talk of the town, with each taking jibes against the other. Their verbal wars caught international attention, and people across the country expressed their opinions on it.

Recently, the two shared a cold handshake, which has again triggered reactions from the media and from Netizens. After Australia’s victory, Tim Paine came over to shake Virat’s hand.

While Paine seemed cheerful and even offered a friendly pat on the back, Virat merely shook the captain’s hands and walked away. Clearly, he is still not over it.

It was frosty between Tim Paine and Virat Kohli at the end! https://t.co/Xmn2akfpAT pic.twitter.com/ka1NR5QoEP

But Twitter had mixed reactions on this. Check it out:

We see what we want to see. Australia will see this as frosty. India will see this as a man who is ultra competitive & hates to lose, just lost a match & is extremely disappointed. He should hands, but surely, you can't expect him to smile at the same time he lost? #AUSvIND

In fact, people said that he was justified in behaving this way:

I stand corrected. He does show sportsmanship after all I guess😬 pic.twitter.com/XBiCiMZPNH

Someone else had a different opinion:

" smile at the same time he lost" that is called sportsmanship, which Kohli has none of. He can dish it but can't take it. What a sook.

People felt that he needed to be more humble:

@imVkohli You wouldn’t even make eye contact with the opposing captain you weak cat!!!! If you’re going to carry on the way you do, you should be humble in defeat!!! Put your ego and arrogance aside for the good of your team and nation @FoxCricket #Kohli #AusvIndia #pieceofshit

Virat’s loyal fans did not fail to give back to the Aussie fans:

His ego and arrogance came back to bite him this test match! pic.twitter.com/TQOmJWkacU

Which side are you on?

According To Kapil Dev, This Cricketer Is The Greatest That India Has Produced
IPL Auctions Is The Latest Meme Topic On Twitter. People Can’t Stop Laughing At The Crazy Prices