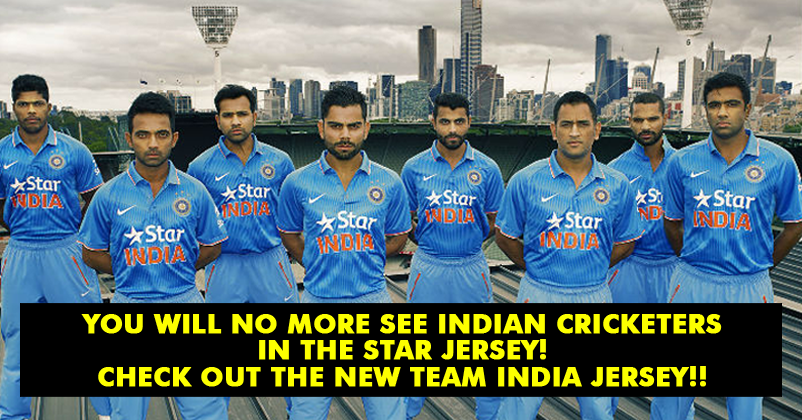 Indian Cricket Team’s new jersey was unveiled today at an event. The mobile company OPPO has got the sponsorship rights for the next 5 years at the astonishing price of USD 162 million (INR 1079 crores).

OPPO Mobile’s President Ski Li and BCCI CEO Rahul Johri came together for the launch here in Mumbai. Have a look at the new jersey –

BCCI welcomed the new sponsors OPPO in the family

This is the biggest price ever any company has paid to buy the sponsorship of Indian Team said BCCI CEO, Rahul Johri.

“This is almost five times the previous bid (Star India’s). The second highest bid was from Vivo which was 768 crore,”

Team India will be seen sporting the Oppo-sponsored jerseys in the limited-overs format games. If the idea to send the Indian Team for the Champions Trophy 2017 gets locked by BCCI then, Men In Blue would be seen sporting the new jersey at the ICC tournament, which is scheduled in England from June 1. The overall look of the jersey has not changed a lot in comparison to the one that they had earlier in the limited overs. The colour is the same shade of blue but a strip of the tricolour runs down the shoulder region as a new addition to the design. The sporting partner Nike has its logo embossed on the jersey along with the BCCI logo as well.

OPPO India is the phrase inscribed on the centre region of the jersey. The golden stars continue to feature along with the BCCI logo. The fabric used for the jersey is said to be of high-quality fabric to ensure total comfort of the players on the field.

Though on Twitter, the people are not supporting the idea of giving sponsorship to a China company. Here’s what they said –

What a shame ? Chinese brand for a Indian cricket team ? Can't you get better brands ??

Well it would be exciting to see our Cricket stars in the new jersey.

What do you think about the new Indian Team Jersey? Do you like it? And what’s your say on OPPO as a Chinese company being Sponsors of Indian Cricket Team? Share your thoughts in comment section.