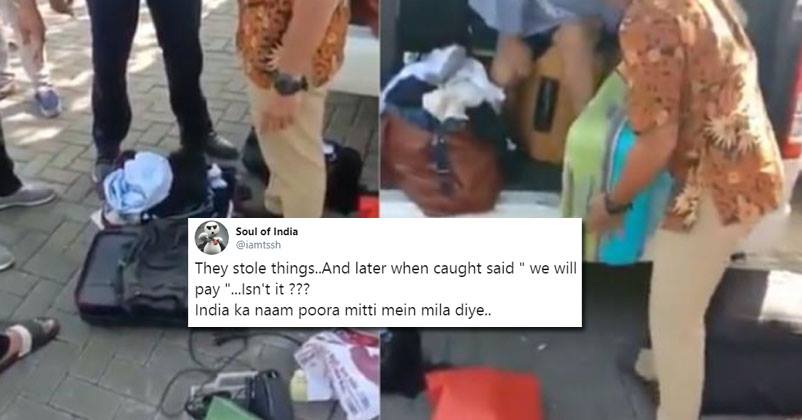 This often happens, and it is not a joke, people from India, which is us shamefully tend to steal. From mugs of steels from toilets to fancy things provided by high-end hotels. This is a tendency that Desi’s can’t get over with. What we do is the image of our country; how we behave is a presumption of our people. And it will not come out as a surprise when foreigners make such stereotypes.

A well off family from India was caught in Bali for stealing. It can be seen in the video how the staff busts the family and removes all the items stolen from their bags. The video goes for a long two minutes, where stolen things are coming out again and again. The males of the family are seen offering money in the video, saying that they will pay for all the stuff. But the staff keeps saying that this is an utter act of disrespect.

Why do Indians do this I just can’t understand. One shd maintain a certain kind of dignity n class ..What is this #Shame pic.twitter.com/VzmzqmZmVv

See how people reacted on the video :

Listening to their argument is another irritating. Even after caught they are shameless.

Shame these are the people who used to steal even Indian railways they do such things stealing blanket bedsheets etc.
Atleast they shouldn't have done this while they are out of country. while you are outside of India you are just representing your country.☹️☹️☹️☹️😟😟

What the guy said is so relevant – it’s not about money. It’s respect !

See, the shameless Indian thief family who shamed Hindustan on the world screen, stole goods from the hotel in Thailand.

See, the shameless Indian thief family who shamed Hindustan on the world screen, stole goods from the hotel in Thailand.

Indian's caught stealing stuff from Hotel room on a holiday trip to Bali. These are the kind of people that bring bad name to the country and community. Pakde gaye tau sorry sorry !

In Thailand newspapers had pictures of indian washing hands in the pool and pissing into streetside flowerpots 🤦🏼‍♂️🤦🏼‍♂️
How do you expect the local populace to react to indians after that. Shame Shame

Urvashi Rautela Says She Is Not Dating Hardik Pandya. Adds She Has Family To Answer To
Dhinchak Pooja Stuns Desi Netizens With Her New Single, Twitter Triggers Hilarious Memes