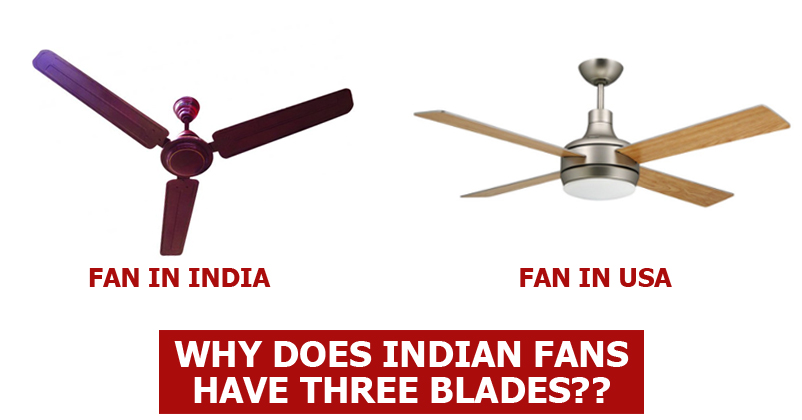 It is summer time, or at least that’s what I can say for myself sitting in a crowded bus coming back from college.

The humidity is so much that even the dead looking table fan hanging at Neptune distance seems to show it’s presence just like to that of Shikhar Dhawan’s in Indian Cricket Team, that accounts for nothing. While I was looking at the table fan for no reason, something struck in my mind. Why the heck does it have just 3 blades. Even the ceiling fan have 3, Even our conventional desert coolers have 3. And in India, we do have a saying which goes like, ‘Teeen Tigara, Kaam Bigada’. So in a place where superstitions have deep roots, why do people always opt for an electrical appliance having 3 blades which indeed have the potential to fall on a person’s head that may just kill him. In USA and Canada, the primary requirement for the ceiling fan is to circulate the air while the air conditioner works. In winter, many of these fans have a reverse switch which can be flipped to turn the direction of the rotation so that it can draw cold air from below and the warm air from the heater (usually located along the walls close to the floor or with vents on the floor) can fill the room underneath the fans.

Now the reason why American fans have 4/5 blades is because they don’t really need high speed fan as they do have an Air Conditioner working. Fans with 4 / 5 blades are usually slower. Also, these fans generally have a maximum of 3 speed settings. We should also consider the fact that Americans are very particular with their comfort level and ambiance of their room, so they do usually use lighting fixture with 1-4 bulbs under the central hub, which indeed compels the fans to slow down their speed otherwise the high speed could blow off the lights.

Now given the fact that America is already a developed country where air conditioner is not a luxury, it’s quite likely that every household does have an air conditioning system unlike in India where Air Conditioner is still consider as a luxury.

Since majority of the household doesn’t have air conditioner or even if they do have it, the high electricity price doesn’t always make them use it, hence we Indians do need fans with high speed so as to get a cooling effect although it’s just a perceived cooling effect. The only way to get high speed in a fan is by reducing the weight and decreasing the number of blades. And that’s the reason why we Indians have 3 Blade Fans with no extra lighting fixtures. Also three blades turn out to be the optimum number of blades for best air moving performance and efficiency in a ceiling fan’s case.

Well, if you still think that I have missed anything, you are most welcome to add more in the comment section below ! !

Continue Reading
You may also like...
Related Topics:america, blades, ceiling fans, fans, Here Is Why Indian Fans Have Just 3 Blades Whereas American Fans Have 4 Or Even More, India

Ever Wondered Why Do We Sometimes See The Moon During Daytime
Damn!! You Have No Idea How Much Gigabytes Of Memories Your Brain Can Hold