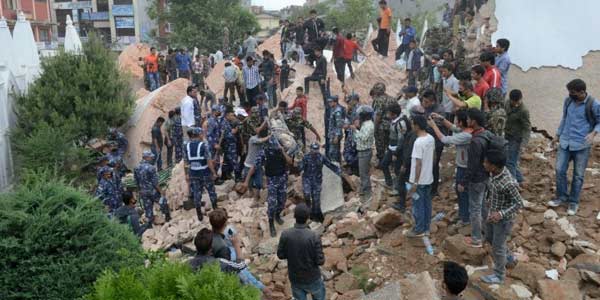 We all knew about the Tragic Earthquake which Striked Nepal and Eastern States of India. This Earthquake had a Magnitude of 7.7 on the Ritcher Scale which is considered to be very High. This Tragic incident Shook the whole world and most of the people are looking out for Help from Government and other NGO’s.

Here we Bring you How Indian Government is Trying to Rescue Indian Citizens to bring them back Home with the Help of Social Networks. Suparna Singh is the Managing Director of ndtv.com. She was trying to get info on Dr. Sridhar Reddy who was a part of Trekking Group of Indian Doctors from US. Immediately after knowing about the Quake she posted a Tweet to Sushma Swaraj, Foreign Minister, Government of India. Sushma Swaraj and her Team took the information from her and found him. Another Incident is when Anuradha tried to find his Father who was in Kathmandu and Tweeted it to Sushma Swaraj. And the Foreign Minister was Quick enough to reply and enqiry about the Information.

After recieving the Photo and Details about Nikumbh Sushma Swaraj put up a Tweet as shown below.

Anuradha’s Father Nikumbh is yet to be Located. Hope he will Located and will be back Home very soon. Not only the Nepal Earth Quake Incident, Indian Government was very Quick enough to Rescue people from Yemen.

Following are the Tweet Responses which saved lives of some People from Yemen. Sabh Shawesh asked for the Help to Rescue her baby and yet again Sushma Swaraj was always there to Help Indians. As Promised Sabah Shawesh were safe and Reached Home Safely. Rahul asked to help his Sister from Johannesburg and the Government took the Iniative and brought her back Home. The Family and Friends were given the Flight Information also. Taher Bhura gave information to rescue about his family of 150 people and they are Rescued with in a week. A Happy Citizen who was on his way to Home expresses his Gratitude to Sushma Swaraj. Government was also Responsible to Give the Flight Information in order to Rescue the people. Government Officials were also good in Taking Suggestions from the People and Alert them about the Rescue Operations. Government has also made Arrangements to Resolve Passport issues. Isn’t that Great? Government also were taking care of bringing back Home Mortal Remains of the people who were not been able to Rescued by them. Share your Views about the Government’s Great Work in the Comments Section below.