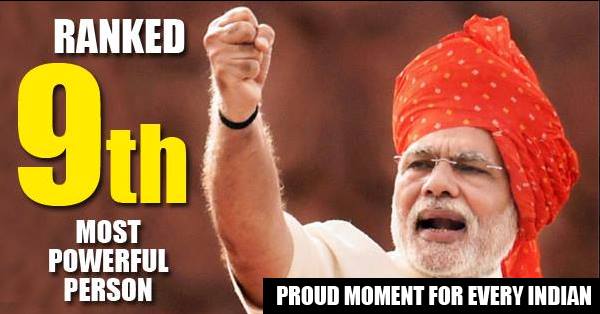 As per the list released by the Forbes Magazine, Indian Prime Minister Narendra Modi is the ninth most powerful man in the world. PM Modi’s standing last year in the list was 15th so it can be called a great jump by PM Modi.

The number one position in the list is obtained by the Russian President Vladimir Putin straight third time in the row while the US President has slipped one spot down and is on the third spot now. The chancellor of Germany Angela Merkel has reached the 2nd spot this year; she was on 5th position last year. Xi Jinping, the Chinese Premier is on the 5th position while British PM David Cameron is on the 8th spot.

Among the non-political figures, Pope Francis is on the fourth position while Bill Gates of Microsoft is the 6th most powerful man of the world.

Forbes magazine has stated that the process of finding out the most powerful people of the world was very complex and several candidates from almost every field of life have been examined before the final list was made.

Forbes also said that it needs more than just “shaking hands” to run a government in the nation of 1.2 million people and Modi should make sure that the reform agenda of his party should be implemented and he should control the “fractious opposition”.