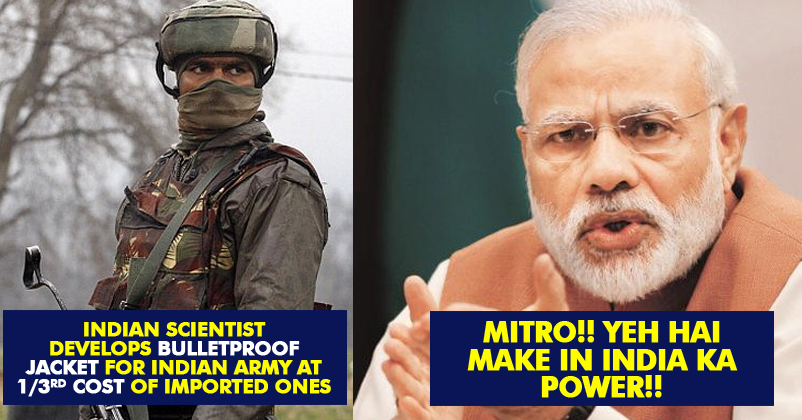 India is a country of more than 1.2 billion people, so the collective talent is far more here as compared to any other developed country. The only problem with our country is that its talent hasn’t been utilized completely. But better late than never.

So, in the new turn of events, the Indian government has approved the bullet proof jacket for Indian Army made by our own Bengali scientist Shantanu Bhowmick. As per TOI, The empowered committee of the Ministry of Defence approved the jacket, which is made from indigenous ultra modern lightweight thermoplastic technology. It will be included in the Prime Minister’s ‘Make in India’ project. The task of manufacturing the jackets will begin after the PMO gives it the green light and if all goes well, it will be the first time that Indian army will use home made bullet proof jackets.

As per the reports, India spends Rs 1.5 lakh on a single jacket used by the military and para-military forces right now. These jackets are imported from America. Dr Bhowmick’s jacket will cost only Rs 50,000 per jacket. That means India will save Rs 20,000 crores every year and the spent money will remain in the country only.

It is also being said that the new jackets will be at least 6-8 times lighter compared to old ones that weigh around 15 kgs. It has 20 layers and the carbon fiber in it will enable the jacket to work in 57 degrees Celsius also. So, with all these extra benefits in our own bullet proof jacket, the day is not far when we’ll start exporting it. Professor Shantanu Bhowmick is the departmental head of aerospace engineering in Coimbatore’s Amrita University. He has high hopes for his new invention and expressed his happiness at getting the official nod for the project. He thanked former Deputy Chief of Army Staff Lt Gen Subrata Saha, who had taken the initiative and encouraged Bhowmick. The professor dedicated his invention to Netaji Subhas Chandra Bose.

Now, this is something really amazing. We hope Indian government and its high authorities continue to encourage such innovations in future too.

Continue Reading
You may also like...
Related Topics:India, Indian Army

They Look Like Small Dots On Dam’s Wall! When You Zoom In, You’ll Be Amazed With The Reality!
Instagram User Called Gauahar Khan A Pakistani & She Slammed Him Like A Boss