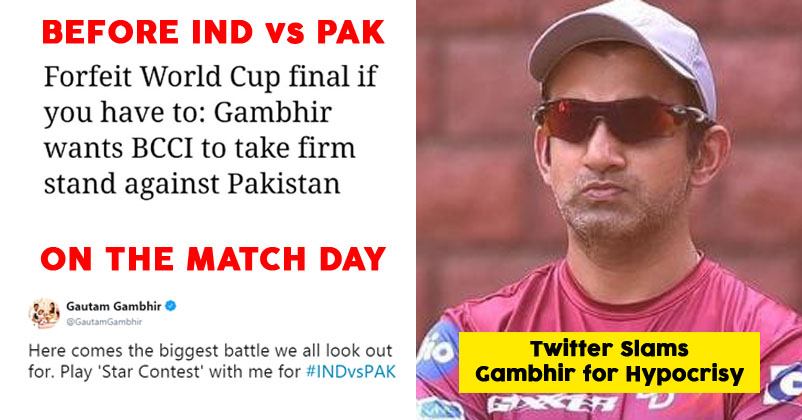 People from both sides were equally excited for the India-Pakistan match that took place of this Sunday. It was the most awaited match in the whole World Cup series. People were showing their excitement on all social media platforms and memes, jokes were circulating like crazy. But one tweet, in particular, grabbed a lot of attention.
Gautam Gambhir’s tweet went viral and people could not stop criticizing him, here’s why.

A few month’s back when Gambhir was running for elections, he tweeted that India should boycott playing in the World Cup and guess who was on the panel for India-Pakistan match? Surprise, surprise, it was Gambhir.

In March he wrote in a tweet, “Either you don’t play them anywhere or open doors for them. What happened in Pulwama is absolutely not acceptable. I am sure it’s going to be difficult to boycott Pakistan in the World Cup but they are not playing them in bilaterals. The best they can do is to stop playing in Asia Cup as well, that’s what I believe.”

And on the day prior to the match, he could not stop adverting the match.

Here comes the biggest battle we all look out for. Play 'Star Contest' with me for #INDvsPAK match on @CricPlay. Let's see if you can score more than me, follow the @CricPlay page, download the App & create your team now! #CricPlay #FantasyCricket #StarContest #AbIndiaKhelega pic.twitter.com/eKRWa8iLYF

Obviously, this hit people and they were upset by the hypocrisy Gambhir showed.

And …..The Hypocrite of the day award goes to….😊

Hahahahahaha .. from advocating for a boycott to commenting on how the Pak bowlers should give 100%. Bhai ..tum hi India ke sahi representative ho.

This is what we call #राजनीति pic.twitter.com/BOJS2zoiUD

Well, Gambhir won’t be the first one to contradict his statement post-election, there are many more to come.