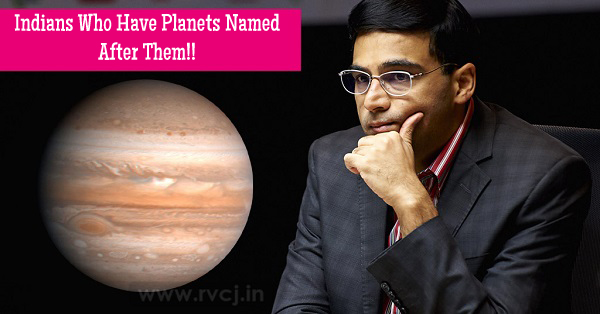 Indians have always shown the world their brilliance and have been awarded for that as well. . But, getting a planet named after their name isn’t a small thing. There are many Indians Who Have Planets Named After Them. Here’s a list who made India and Indians Proud of them.

The chess titan is honored with a main belt minor planet between the orbits of planets Mars and Jupiter, Vishyanand. After he found that his uncle could not easily write in the system of six raised dots,Braille Madhav decided to change it. He modified the system and was honored. (12509 Pathak) He developed a system to automatically categorize documents and find the relation between them. (12599 Singhal) (25630 Sarkar) Debarghya Sarkar and Anish Mukherjee both classmates, noticed the large scale bottle tampering rampant in India at the age of 16 and the idea of auto disposable syringes. Anish Mukherjee and Debarghya Sarkar noticed the large scale bottle tampering rampant in India at the age of 16 and idea of auto disposable syringes. (25629 Mukherjee) He explained a microbial fuel cell that runs on cow dung and inexpensive graphite electrodes in 2010 when he was in class XII. He has a minor planet named after him (25620 Jayaprakash). Nasa named a minor planet 5178 No CD4 after him. He’s a Kerala zoölogy professor and has a great contribution in environmental research and campaigns, including red rain, health hazard of mobile phone towers, biological control of mosquitoes and the eco-biology of trees of religious importance. They are surely making India Proud. Do not forget to share Indians Who Have Planets Named After Them & let us know your views about the article, Please write in the comments section below.

Continue Reading
You may also like...
Related Topics:Indians Who Have Planets Named After Them, Planets named after indians, Vishawanathan anand

8 Facts That You Must Know About Kalpana Chawla – First Indian Woman In Space!
9 Amazing Facts You Should Know About Chanda Kochhar, The MD Of ICICI