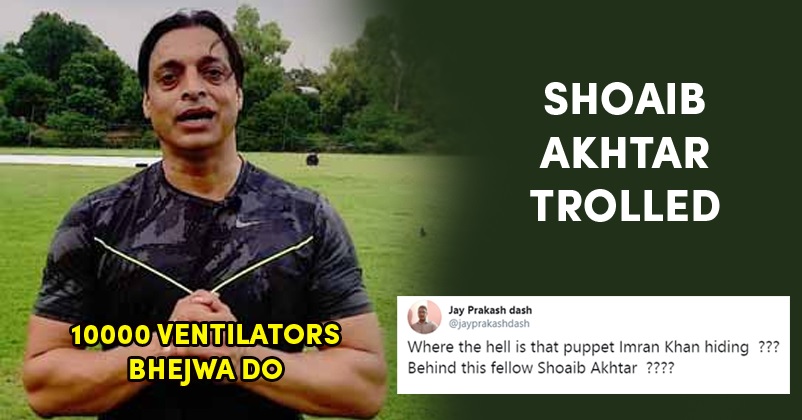 There is no denying the fact that the developing nations have been more adversely affected because of the coronavirus outbreak in comparison to the developed countries because the majority of population in developing nations is poor and the country also lacks enough resources for taking care of its citizens if a lockdown kind of situation arises.

Pakistan has also been severely affected amid the COVID-19 crisis as the number of infected cases has crossed the 5000 mark while more than 90 have lost their lives. Recently, the former Pakistani cricketer Shoaib Akhtar who is pretty active on social media networks and doesn’t mind talking on important issues on his YouTube channel expressed a wish which did not go well with the Indians.

The former pacer says that if India makes 10,000 ventilators for Pakistan, their country will always remember this gesture. Not only this, he also suggests a three-match ODI series between India and Pakistan and as huge crowd will come to watch these matches, a considerable amount would be earned which can be divided equally by both the countries and those funds can be used for fighting COVID-19. He also adds that he can just give suggestions and it is up to the authorities to take the final decision.

As the Pakistani cricketer expressed his wishes, the Indian Twitterati got into action and trolled Shoaib Akhtar mercilessly. While some ask why he is begging and instead, he should ask his PM Imran Khan to do the same, several others were of the opinion that Pak is not at all serious in regard to coronavirus otherwise it would have acted decently during the SAARC meeting. Here are some of the selected tweets:

Their PM wants all loans waived off. Shoaib Akhtar wants 10,000 ventilators. Advisor to Pak PM is smuggling face masks. The population is wearing Chinese face masks made from used underwear.

And yet…Kashmir is all they can think of. Funny people😂https://t.co/2XuMywC6qA

Less than a month ago, Shoaib Akhtar thought of coronavirus as something divine sent as a punishment for India linking it with Kashmir insurgency. Now, he wants India to donate ventilators to Pakistan.

On 16th March: Pakistani cricketer Shoaib Akhtar linked Coronavirus crisis with abrogation of Article 370 from J&K and tweeted that Dear world, how is the lockdown?

Dear World, how is the meltdown?

If Pakistan is willing to hand over an equal number of terrorists including Hafiz, Dawood and Azhar I say we should do it 😄

Why Shoaib Akhtar? Is he the PM? Maybe PM chair is shared by cricketers. Let @ImranKhanPTI beg like his buddy did. India would think. Till then bank on masks made from used underwear and poor quality test kits from China. No one helps a country which exports terrorists and begs https://t.co/wrb4yuDNfU

Looks Shoaib Akhtar has lost all hopes in @ImranKhanPTI and has been literally begging India for help pic.twitter.com/Ss3uSx7PO3

Who the hell is #ShoaibAkhtar .??
If Pakistan wants begging then Imran Khan should demand why Shoaib Akhtar.??

Shoaib Akhtar is asking for ventilators. How about 👇 pic.twitter.com/thIkRryHCl

Not so kind regards,
India pic.twitter.com/hMD8El8y6n

Finally Shoaib Akhtar has accepted that India is a father of paxtan and he beg for 10,000 ventilators from India. pic.twitter.com/XLRhBzYMaH

Is shoaib Akhtar out of his mind?
Cricket match during this time🤦‍♀️
He wants 10000 ventilators from India. India first av to make its ventilators for its ppl. Stop spreading hate…spread some positivity..

Where the hell is that puppet Imran Khan hiding ??? Behind this fellow Shoaib Akhtar ????

Former cricketers Kapil Dev and Zaheer Abbas have straight away denied chances of any India-Pakistan cricket series in the near future, especially when the coronavirus pandemic has affected so many people. Gathering of people at a location has to be avoided as coronavirus is contagious which makes the suggestion of Shoaib Akhtar absolutely non-feasible.

Indians are also not in the mood to help Pakistan because the neighbouring country has been promoting anti-social activities for a long time and the tension between both the nations increased further when the Indian government carried out the surgical strikes in order to teach Pakistan a lesson.

As far as coronavirus is concerned, it has infected more than 18.5 lakh people while over 1.10 lakh have lost their lives all across the globe. Please stay at home and stay safe.