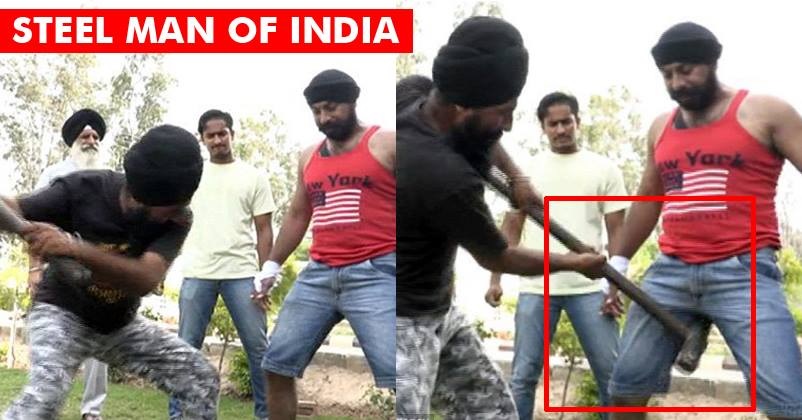 India has definitely got a lot of talent and people from this divine land proves it time and again! India is a land of brave people and Indian do every possible thing no matter how difficult it is to prove themselves. Even around the globe, we (Indians) are given preferences just because of our sharp minds and utmost dedication. No matter what comes on our way, we achieve our goals by fighting till the end. 34-years-old- Amandeep Singh is the proof that we live in the land of strong people who can make the miracles happen.
Amandeep Singh is popularly known as ‘Man of Steel’ and he has a dream of becoming the strongest man in the world after breaking 50 separate records. Becoming the strongest man on earth just can’t be a cake walk. To achieve his goal Amandeep is working out hard and covering the milestones one by one.

From letting a car run over his stomach to taking a sledgehammer to his private parts nothing seems impossible for Amandeep.

Take a look at some of the dangerous stunts that he performs. This may look painful to you but it’s totally Amandeep’s cup of tea!

He got such daring instinct from the training that he started at a very early age. Amandeep started learning martial arts from the age of seven. Today, he is the teacher of Karate and self-defense of more than 3000 students. Amandeep, the man who isn’t afraid of hitting is balls with a hammer and is always up taking any difficult challenge absolutely deserve applause.

“After years of hard work, I can do more than 3000 types of stunts. I am only expanding my horizon as a tough stuntman. I am always willing to do what people find impossible. I was easily lifting a man and a bike so I thought why not push myself a little and it worked after some practice. After such rigorous training, I don’t get hurt even if a car runs over my head,” Amandeep told Daily Mail.

Amandeep Singh, the Man Of Steel from Haryana is an absolute example of incredible India. His efforts and hard work have brought him at a stage where he is now waiting for his records to be verified by Guinness World Record officials. To know more about Amandeep and the breath taking stunts he performs, take a look at his video…

Man, salute to your bravery!

What do you think about the Man of Steel, Amandeep Singh? Isn’t he just astonishing? Do share with us what do you feel about his amazing stunts in the comments section below! 🙂

Pakistani Chaiwala’s Super-Duper Makeover! Girls Will Feel Like Marrying Him Right Away….
These Celebrities Have Made Jawans Feel Special With Their Diwali Messages! RESPECT!