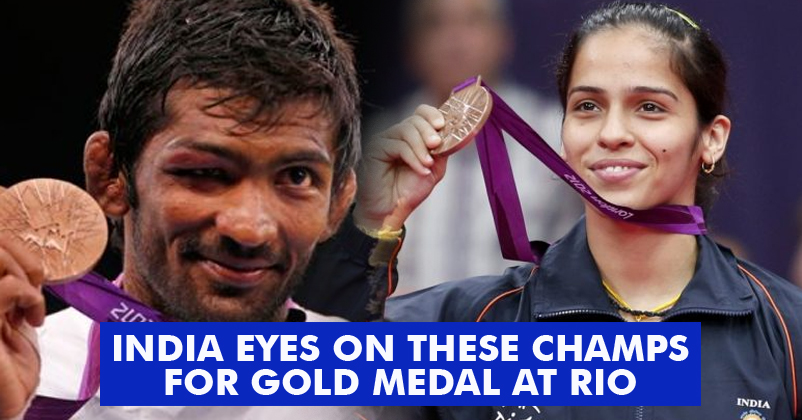 Olympics are the prestigious multi-sporting events with thousands of athletes competing in different sports. The 2016 Summer Olympics will be played from 5 August to 21 August 2016 and are scheduled to be held in Rio de Janeiro, Brazil. 206 Nations are participating in the Rio Olympics with a record number of 11,000+ athletes. These athletes will feature in 306 sporting medal events in 28 sports. As the world’s biggest multi-sport event is about to start, we bring you some exciting stuff from the Olympics.

Here’s presenting you 10 Medal chances for India at the Rio Olympics.

Of the 8 wrestlers who qualified for the Olympics, Dutt is a serious contender for the Olympic medal. Yogeshwar Dutt has proved himself by winning a Gold medal at the 2014 Asian Games and an Olympic Bronze at the 2012 London Olympics. With their current double rankings of #1 & #10 respectively, they are highly expected to win a medal for India at the Rio Olympics. Sania Mirza has won a Gold medal in Mixed doubles at the 2014 Asian Games. Sania played very well in the recent Grand Slam events and it’s high time for her to win an Olympic medal. All three of them will take part in individual and team events and are likely to win a medal at the Rio Olympics. Deepika is ranked #4 and has also won Gold medals in individual & team Recurve events at the 2010 Commonwealth Games. Jitu Rai is an underrated Indian shooter who is currently ranked #1 in 10M air pistol & #4 in 50M air pistol. Despite playing in his maiden Olympics, Jitu is one of the serious contenders for a medal in shooting for India. Previously, he has won Gold medals in te 2014 Commonwealth Games & ISSF World cup. Shiva Thapa became the youngest Indian Boxer to qualify for Olympics when he did it in 2012. Shiva is ranked 3rd in Bantamweight category in the world. He was the third Indian to win a Gold at the Asian Games and he also won a Silver at the Youth Olympic Games. Out of 3 boxers who qualified for the Olympics, Shiva is a strong contender for India at the Rio Olympics. Saina Nehwal is the poster girl of Badminton in India. Previously, she has won a Bronze at the London Olympics and a Gold at the 2010 Commonwealth games. She is also a serious contender for winning a medal at the Rio Olympics. With his participation in 2016 Olympics, Paes will become the only tennis player to compete in seven different Olympics. He has a Bronze medal to his name in Men’s singles at the 1996 Atlanta Olympics. Despite the personal issues among each other, the duo is considered to win a medal at the Rio Olympics. Dipa Karmakar – India’s first ever Woman Gymnast at the Olympics

Dipa is the first and only Indian female gymnast to qualify for the Olympics. She has won 2 Bronze medals one each in the 2014 Commonwealth Games and 2015 Asian Championships. Abhinav Bindra is India’s sole Olympic Gold medalist in an Individual event. He is the flagbearer for India at the opening ceremony of the Rio Olympics. This will be his final Olympics and there is every hope that he can win a medal for the country. What will the medal tally of India at the Rio Olympics? Share your thoughts in the comments section below.

Indian Hockey Team Players Living In Pathetic Condition – NO Furniture ! !
Yuvraj Has Acted In A Punjabi Movie When He Was A Child! Here’s The Video!