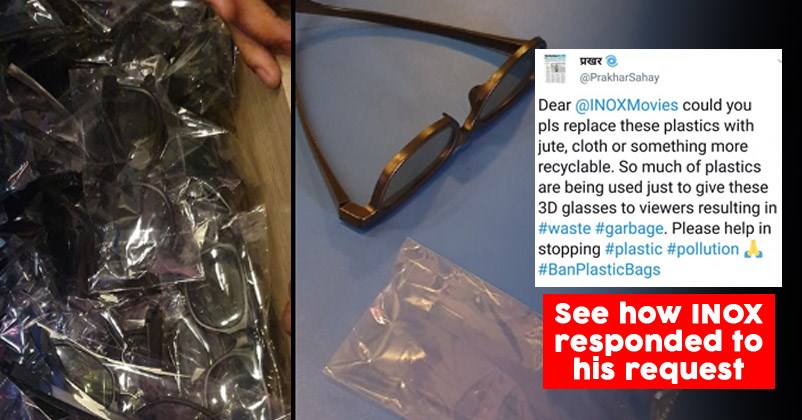 Prakhar and his friends decided to watch the movie in 3D. When Prakhar was handed over with the 3D glasses one particular thing disturbed him all the while. It was the plastic bag in which the 3D glasses are given out to the people all over India.

Prakhar was wondering how plastic production can be stopped as gallons of plastics are being generated for each show across India. He took the initiative of being a responsible citizen of mother earth. He clicked some pictures of the 3D glasses in plastic bags available in Inox and later he tweeted on Monday about it and asked the Inox authority to take immediate action to replace the plastic bags with jute or cloth bags which will be recyclable.

Dear @INOXMovies could you pls replace these plastics with jute, cloth or something more recyclable. So much of plastics are being used just to give these 3D glasses to viewers resulting in #waste #garbage. Please help in stopping #plastic #pollution 🙏 #BanPlasticBags pic.twitter.com/I6I8vILPk9

So that at least the pollution can be kept a bit in control as at the end of year tons of garbage is being generated which can’t be recycled. As a small step will help to create a change.

On Wednesday Prakhar received a call from the Inox Management team stating that they’ll be replacing the plastic bags for the 3D glasses in next two weeks across India.

Thank you @SherwaniNaved @JainSiddharth_ @INOXMovies for initiating quick action #Respect. I'm being told that these #Plastic bags are in process of being replaced by next 10 days across #India. Thank you for taking this BIG step to help environment 🙏 Well Done!!! #pollution https://t.co/75fOkoRPfB

Inox India has taken this initiative as their top priority and soon Inox India will be having the eco-friendly bags for their 3D glasses.