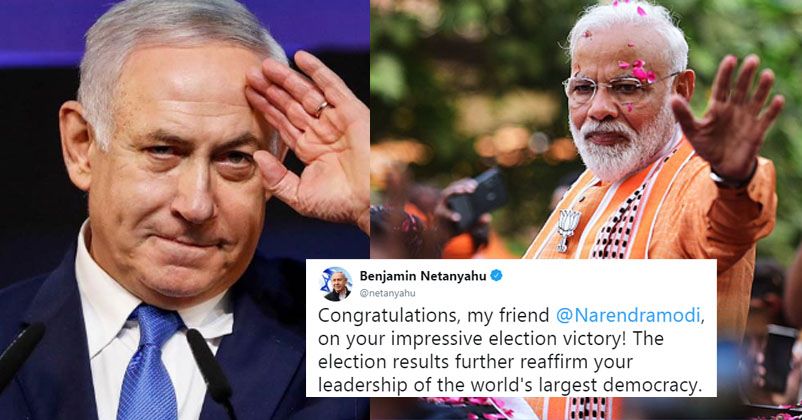 Bharatiya Janta Party is leading by crossing the halfway mark on its own steam, the vote counting is still in progress but with BJP crossing the 200 marks the final result of LOK SABHA ELECTION 2019 is already out.

The election was held on 542 seats out of 543 LOK SABHA seats. However, a party or alliance needs at least 272 seats to form a government. The 17th Lok Sabha election results are being announced today.

International Leaders took to Twitter to congratulate PM Narendra Modi after the trends were released by the Election Commission:

Congratulations, my friend @Narendramodi, on your impressive election victory! The election results further reaffirm your leadership of the world's largest democracy. Together we will continue to strengthen the great friendship between India & Israel.
Well done, my friend! 🇮🇱🤝🇮🇳

Congratulations to PM @narendramodi on his historic victory in the Indian general elections. It is a strong affirmation of the Indian people's confidence in the BJP/led government. I look forward to closer and enhanced ties of Maldives-India cooperation.

Congratulations on your victory and the peoples re-endorsement of your leadership.
Sri Lanka looks forward to continuing the warm and constructive relationship with India in the future.@narendramodi

Congratulations to PM @narendramodi on a strong mandate from the people of India. The government and the people of Afghanistan look forward to expanding cooperation between our two democracies in pursuit of regional cooperation, peace and prosperity for all of South Asia.

MP Congress Leader Passes Away At The Counting Center Because Of A Heart Attack
PM Narendra Modi Web Series Goes Live Again, After A Month Ban By Election Commission