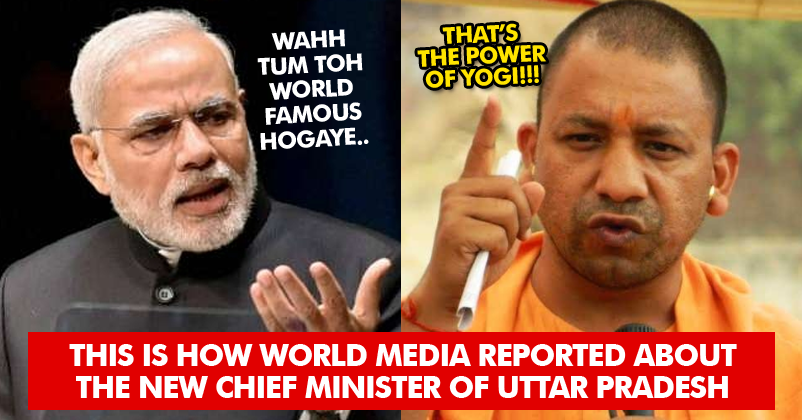 In India, if a news breaks out, people are bound to react on it. There is no denying the fact that almost every single eye in the world is right now watching India’s progress and hence, every big and small news makes its way to the big circuit of the international media who have their own opinion about it. At such times, the international media just can’t look away from the news of Yogi Adityanath becoming the next Chief Minister of Uttar Pradesh.

According to some people, it is always advisable to ask for opinions from the third party who are not directly involved in the matter as they are expected to give an unbiased judgment about the whole issue. However, at the same time, some people also think that it is none of their business to poke their nose into someone else matter. But at the end, they all have the right to make an opinion about anything and everything. You don’t like it, just don’t read it.

So here we present some of the screenshots from various international media websites who expressed their opinion on Yogi Adityanath.

“The choice of Yogi Adityanath — who has been repeatedly accused of stirring anti-Muslim sentiments — to lead Uttar Pradesh, came as a shock to many political observers here, who have become accustomed to the carefully moderated public positions of Prime Minister Narendra Modi, in line with his projected image as a pro-development leader and global statesman”

The website sarcastically highlighted the incident when Yogi Adityanath prayed and wished for Donald Trump’s win in America.

“He has also supported strong laws for cow protection, and said minority groups that oppose yoga should either leave the country or drown themselves in the sea” stated in the report.

Going through their article, it seemed like they were actually criticizing the party’s decision of appointing Yogi Adityanath as the CM of Uttar Pradesh.

In the report, they stated “Mr. Adityanath is widely regarded as a polarizing figure because of his well-publicised anti-Muslim comments. The BJP leaders probably believe that their election formula of consolidating the votes of the Hindu majority will help them to sail through the next general elections”.

In their article, they talked about Yogi Adityanath’s seriousness for the Hindutva Ideology and discussed his past records as an MP in Gorakhpur.

“In a state with nearly four crore Muslims, where the BJP decided to field not even a single candidate from the minority community in the election, the chief minister-designate could be seen as adding insult to injury, because, more than anything else, he is known for his strident anti-Muslim rhetoric” stated in the report.

So these were some of the websites of International Media who expressed their opinion on the news of Yogi Adityanath becoming the Chief Minister of Uttar Pradesh. Now, what are your opinion about it? Please share your views in the comment section below.