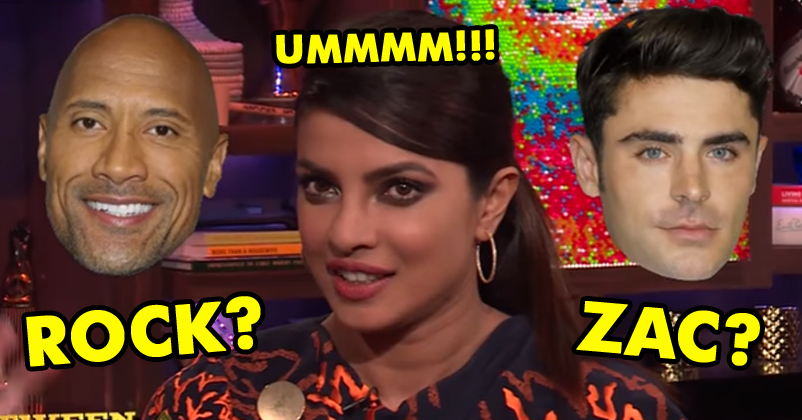 Priyanka Chopra is one tough nut to crack. We’ve seen her answer the toughest media questions effortlessly and whatever she says is full of the raw swag. However, recently during the promotional interview for her upcoming Hollywood film Baywatch, Priyanka found difficult to slay a hard question.

Piggy Chops was at the show “Watch What Happens Live With Andy Cohen” accompanied by Amy Brenneman. As always, she was looking gorgeous and full of confidence. The host, however, had his own evil plans and wanted Priyanka to reveal some awkward secrets so he asked her about her co-stars Dwayne Johnson & Zac Efron’s d*ck size. LOL. Now this question brought the house down with laughter and Priyanka dodged it by saying,

“I don’t know… that was not part of the question. the trailer was Dwayne”

While the question originally was that who has the biggest trailer among both but then Andy changed it to d*ck size.

You can also watch the video directly on Youtube.

Andy asked some more fun questions like who smells better and who has better abs but this one was the show stealer. We enjoyed it thoroughly. What do you think?

Continue Reading
You may also like...
Related Topics:baywatch, Priyanka Chopra

Rana Daggubati Is All Set To Play This Powerful Role In His Next! Check Out Details!
Bollywood’s Favorite Mom Reema Laagoo, Dies Of Cardiac Arrest! RIP!