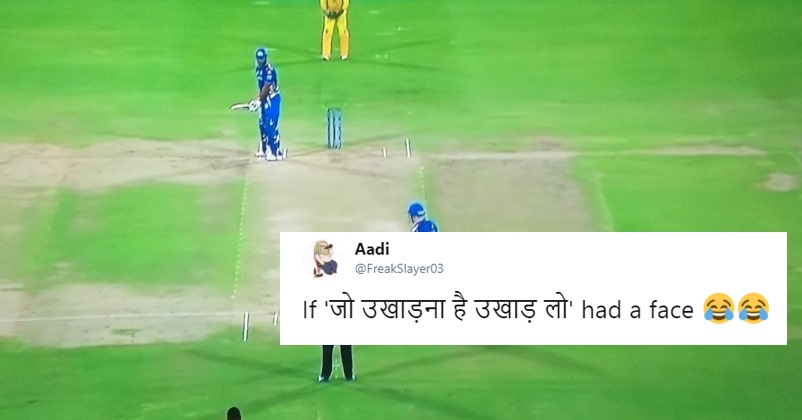 The Indian Premier League finale was nothing more than a magnificent match and we saw the most fitting finale as Mumbai Indians defeated Chennai Super Kings by 1 run and won the title for the fourth time. Mumbai Indians became the most successful team in the history of the tournament.

Kieron Pollard the all-rounder cricketer of Mumbai Indians(MI) grabbed a lot of eyeballs in yesterday’s match against Chennai Super Kings(CSK) in Hyderabad.

In the last over Pollard was facing Dwayne Bravo’s tremendous attack. Pollard lost his cool when umpire Nitin Menon failed to give the wide ball after bravo’s yorker went past by the tram line.

Pollard threw the bat in the air to express his frustration and anger. Bravo walked back for the fourth delivery that’s when Pollard walked towards the tram lines for Bravo’s next delivery and then walked out of the pitch and stood outside the off stump guard.

That’s when the umpires Nitin Menon and Ian Gould halted the match to have a word with Pollard, after noticing the ongoing anger on the field.

Later, Pollard was fined 25 per cent of his match salary for not agreeing with the umpire’s decision. But the all-rounder cricketer was supported by his fans.

Have a glimpse of some of the best memes in support of Pollard :

#Pollard’s move to move away was a classic #CSKvMI

#MIvCSK
Worst ever umpiring..
Fucking umpiring through out the season..#Pollard did the right thing

Do you think what Pollard did was right?

Mumbai Indians Win With A Bang, See How Twitter Reacts To This Much Awaited Victory
Jemimah Rodriques Slammed A Fan In Style For Asking Her Relationship Status