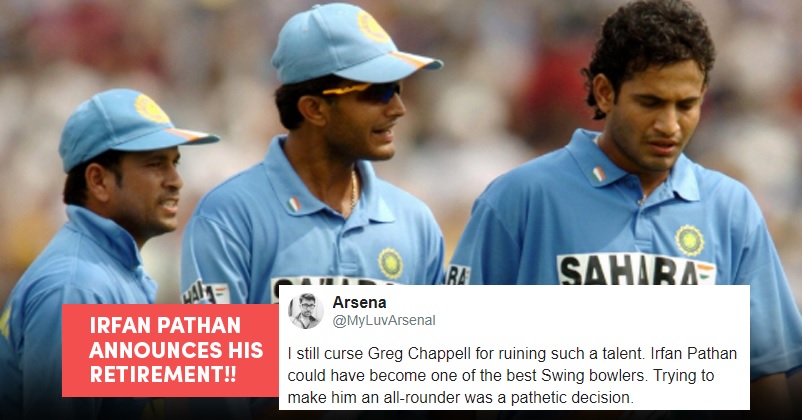 Irfan Pathan may not be a part of the Indian cricket team for a long time now but there was not a moment when the Indian cricket fans forgot him. He is one of the most loved and most popular Indian bowlers and is famous for not only his lethal swing bowling but also his cute smile.

There was a time when many Indian cricket fans used to believe that Irfan will become the best swing bowler of the world; in fact, some used to call him the next Wasim Akram. However, things didn’t take place as expected and then came a period when the Indian team saw its one of the worst phases. 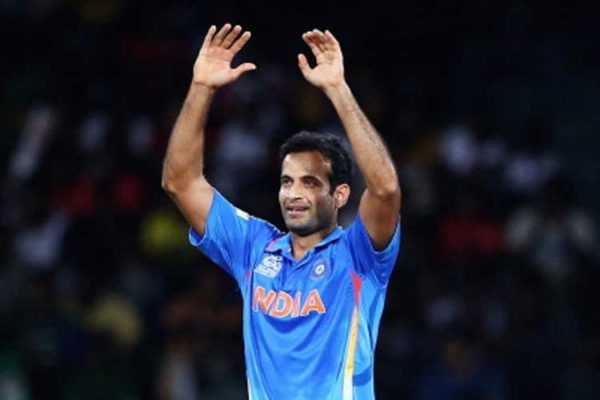 It happened during the tenure of coach Greg Chappell who tried to transform Irfan into an all-rounder and it affected his performance as a bowler in a serious manner.

Irfan was not able to make a comeback once he was dropped and majority of the Indian cricket fans held Greg Chappell responsible for it. Here are some of the selected reactions:

U were a true game changer @IrfanPathan.. Ur hatrick against pak is still fresh in my memory. I wish you had played more games. But anyways, good luck for future.

Irfan pathan is the best example of What impact a bad Coach can have…🤦🏻‍♂️
Chappel,ruined the whole career of this fella…

Thank you @IrfanPathan for your fantastic career of entertainment. It was bliss watching your bowling with great swing and line.. You deserve better sent off. Hats off to you Sir

Irfan could curve the ball at will…make the ball talk…

I still curse Greg Chappell for ruining such a talent. Irfan Pathan could have become one of the best Swing bowlers. Trying to make him an all-rounder was a pathetic decision. All the best @IrfanPathan sir for your future endeavors. I still remember your that spell against PAK. https://t.co/PO8jDoAcUF

One of the best swing bowlers to have played for India, till Greg messed with him.

Thanks for the wonderful memories.

#irfanpathan, will be remembered as an excellent swing bowler destroyed by Greg Chapel in search of an all rounder. Thank you for your service Irfan. Have a good life off the field.

One of my childhood hero #irfanpathan retires ! Once highly rated all-rounder, even compared with Legend Kapil Dev. Injuries laid his career down. Great talent ! Thank you @IrfanPathan 🙏 for your service to the nation. #JaiHind 🇮🇳

There were two Irfan Pathan.
Irfan before Greg Chappell.
Irfan after Greg Chapell.
Former could have emulated Wasim Akram.

After initial spark ,he lost his caliber post-Greg chappel’s coaching …since 2006-07.Niether remained a good batsmen …lost his pace & penetrative bowling..remained a shadow of his own-self at a pretty young age …very early in his career

First Retirement Of The Week, of The Month, Of The Year, Of The Decade .

Thanks @IrfanPathan for great Memory
I still Remember your Hat-trick Against Pakistan in test .
Congratulations for successful career

Irfan has announced retirement from the International cricket and we are pretty sure that the 35 years old cricketer must have done that with a heavy heart. He has represented India in 29 Test matches, 120 ODIs and 24 T20Is in his career of 15 years. In test matches, he has taken 100 wickets, 173 in ODIs and 28 in T20Is which bring his total to 301 wickets while with bat, he has scored 2821 runs.

We wish all the best to Irfan Pathan for his future!

Hardik Pandya’s Parents Had No Clue Of His Engagement With Natasa
BCCI Used Hairdryer, Iron & Vacuum Cleaner To Dry Pitch In Guwahati, Got Trolled On Twitter