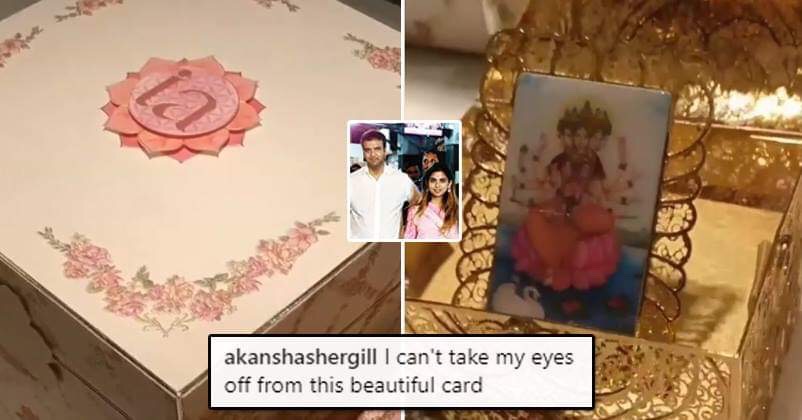 Call it over the top or call it cute but when Anand Piramal took a knee to propose Isha Ambani earlier this year they frankly broke the internet. The couple’s pretty picture was being circulated throughout the globe and frankly, they did look very happy.

#MukeshAmbani's daughter #IshaAmbani will marry #AnandPiramal in India later this year. The couple got engaged over the weekend. Congratulations to the adorable and power couple!

Marriage is a huge deal in India, it is the one time people get to show off and so they do. Although the Ambanis have always attracted heat over their lavish events, I really think the internet should let them have this one. The invites are amazing to say the least, they comprise of two gold boxes adorned with intricate and traditional Indian patterns. Keeping in line with their touch with technology, the box seems to be fitted with a down facing speaker which is pretty loud to say the least.

Here is the first glimpse of the beautiful invite for Isha and Anand’s wedding. Blessings of Gayatri Maa. #ishaambani #anandpiramal #ambaniwedding @viralbhayani

Once you open the box you are greeted by 4 smaller boxes sitting snuggly inside 4 felt lined smaller chambers, and the Gayatri Mantra simultaneously playing in the background. Although the contents of the other boxes are not available on video, you can see a beautifully crafted idol of ‘Gayatri Mata’ sitting inside the first smaller golden box.

People on Instagram obviously went nuts and here are the best reactions we could find for you.

The couple got engaged to each other this September and plans on getting married in December. Their engagement was pretty huge celebrity party in a nutshell with the likes of Sachin Tendulkar and half of Bollywood arriving to bless the couple on the auspicious occasion. The marriage in December consists of a pre wedding bash starting December 8th and the wedding taking place on the 12th of December. We will surely be seeing many more surprises in the coming weeks, hopefully clad in gold again. We wish the young couple the best of married life from our side at RVCJ.

What did you think about the invite? Feel free to share your thoughts with us in the comments below.

Do You Know Why Most Banks And E-Commerce Retailers Use A 6 Digit OTP?
Delhi’s Air Pollution Has Touched Hazardous Heights. Check The Status Of Your City