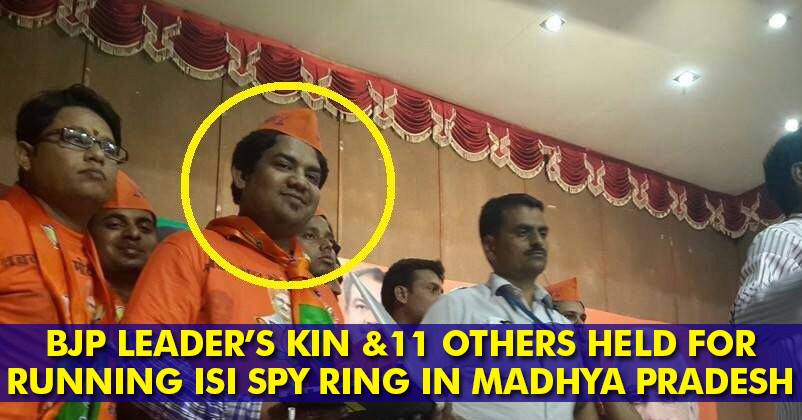 Last year around this time, BJP Party members went ahead to declare the definition of the words like ‘Nationalism’ and ‘Patriotism’ when Kanhaiya Kumar and his infamous speech on JNU went viral for all wrong reasons. But sadly a year later, the very same people have been identified as Pakistan sponsored ISI agents while the students in JNU who were charged with sedition are given clean chits (except a few). On Friday, 11 men were arrested by the Madhya Pradesh Anti-Terrorist squad but soon it all became an ugly political game. As per claimed by a Congress leader, one among the 11 men arrested was associated with BJP Party who worked in their IT Cell department. However, BJP Party was quick to distance itself from this person, but people started noticing it and came up with various proofs by uploading the pictures of that man associated with BJP Party.

ISI agents nabbed in Madhya Pradesh. One of them is a BJP member, close to CM Shivraj Chauhan. These guys preach nationalism to others. pic.twitter.com/unL606jO34

And it’s not just one man who is in the question. There is also another man with the name Jitender Singh who apparently has connections (relation) with BJP corporators. To make things worse, Congress also alleged that this arrested member is closely associated with Union Minister Narendra Tomar and MP Minister Maya Singh.

However, BJP officially has not reacted to any of such news but on a condition of anonymity, a party member has indeed shown his concerns over possible infiltration of ISI agents into their party. This is what he said, ‘Denying association with those arrested in public is one thing but the real problem can be gauged from the fact that one of them was holding a post in the party’s IT cell and he had access to so much data and information.’

The ATS has busted an international call racket that helped these ISI Agents to communicate with the outer world by bypassing the legal channels. The calls were directed to countries like Afghanistan, Pakistan and Nepal. On proper inspection around 40 ‘Simboxes’ (Chinese-made gadget that holds multiple SIM cards) and 3,000 SIM cards were seized. Here is how twitter erupted after the news exploded.

First they accept that RSS is funded by ISI, then they invite ISI to probe Pathankot, Now BJP guy is working for ISI. 😐😱#ISISupporterBJP pic.twitter.com/WVXPtFKPQR

We are all patriotic & we dnt need some facist Chaddi gang to certify if someone is a nationalist or not.#ISISupporterBJP pic.twitter.com/tXoyqsyMRq

"Intolerance on the Rise" Such Strong reaction to SRK's Words //
Nationalists where r u now
BJP Spying for ISI #ISISupporterBJP pic.twitter.com/tFr237NL7B

11 MP Youths Held by ATS for Spying against Indian Army, Out of 11, 2 BJP Volunteers Involved!!

Now apart from these infiltrations of ISI agents, what is more surprising is the fact that it’s the BJP Party who didn’t care to do a background check on their employees and party members. They proclaimed themselves to be the pioneer of ‘NATIONALISM’ but ironically gave shelters to the ACTUAL ANTI NATIONALS. It’s high time for all of us to understand the fact that holding a saffron flag and shouting slogans won’t make us Indians but actually contributing to the development of the society makes us one.

We can easily get offended and take a stand for not watching an actor’s movie because his wife didn’t feel safe in India (apparently due to the threats imposed by these real anti-nationals) but can’t stay united and ask a question to BJP Party that how the heck did these ISI agents infiltrate their so called prestigious institute.

So what are your views about this new news? Please share your opinion in the comment section below.

This 18 Year Old Model Is Driving The Internet Crazy Due To Her “FIGURE”! Check Out Pics!
Here’s Why Crushed Stones Are Placed Alongside Railway Tracks!!