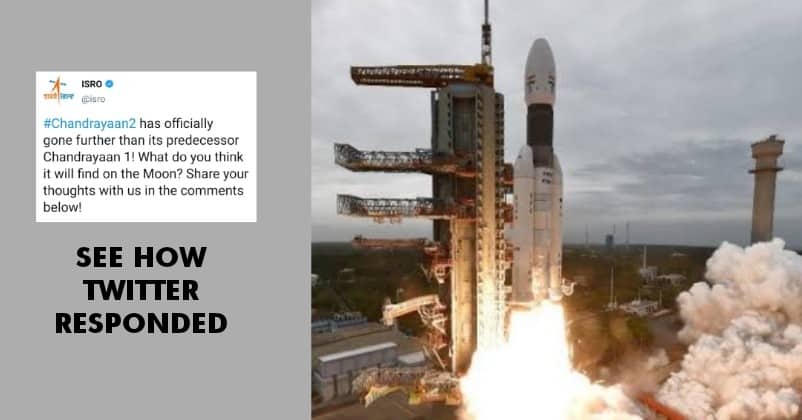 ISRO on Friday announced that their second mission to moon Chandrayaan 2 has officially gone a little further than its predecessor Chandrayyan 1. The Indian Space Research Organisation made an announcement on Twitter and attached a question to it. It asked what people think that Chandrayaan 2 will find on Moon.

With a picture of Chandrayyan 2, ISRO wrote, “#Chandrayaan2 has officially gone further than its predecessor Chandrayaan 1! What do you think it will find on the Moon?”

#Chandrayaan2 has officially gone further than its predecessor Chandrayaan 1! What do you think it will find on the Moon? Share your thoughts with us in the comments below!#ISRO #MoonMission pic.twitter.com/pZEnxPf3su

From aliens and Ganesh Gaitonde to Indian economy and “acche din” twitterians came up with innovative, hilarious and witty replies. Here are some of the best replies from the netizens which will crack you up.

Dream for India….that is the most important.

Nothing but the trash we humans throwing around

– Traces of hydroxyl ions (OH—)
– Existence of heavier elements by its payload CHASE (Mg, Al, Si, Ca, Fe…)
– Residual of materials brought in by the solar winds (H and He)
– The elemental makeup of the local regolith
– The age of the South Polar Aitken Basin or the Moon in gen.

Paragliding Guy Is Now On News Channel & He Tells What Exactly Happened That Day
Sehwag Asks “When Did You Last React Like This?”, His Fans’ Reaction Will Crack You Up