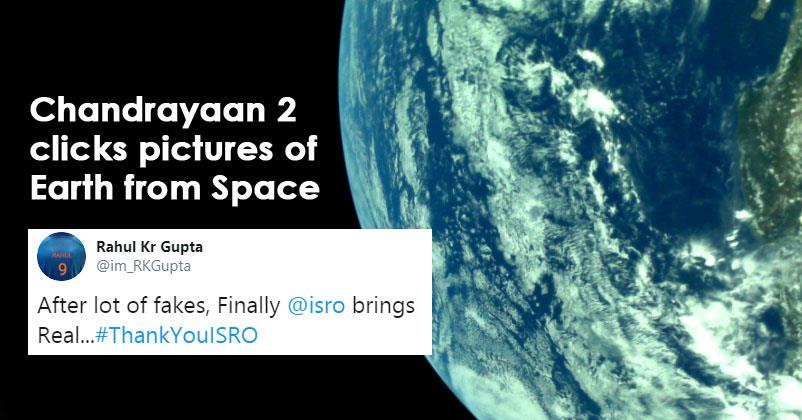 Many fake photos had been circulated on the Internet and social media which were claimed to have been sent by the Chandrayaan-2 but now at last, the Indian Space Research Organisation (ISRO) has released the first set of photos that have been clicked by the Moon Lander.

These photos of Earth have been captured by the LI4 Camera which is on Chandrayaan-2’s Vikram Lander and ISRO posted them on its official Twitter handle.

Check out the beautiful pics of the Earth as shared by ISRO:

The social media users were all praises for ISRO and felt very proud of its achievement. A number of netizens took to the micro-blogging site for expressing their joy while some used this as an opportunity for making fun of Pakistan.

A Big Achievement By @isro and @chandrayaan2.
And a Big Moment For All Indians.
Congratulations to each and every person who worked hard on this mission.
Saare Jahan Se Achcha
🇮🇳 जय हिंद 🇮🇳

Imran Khan after watching this,

We'll send our best photographers to space and give better pictures than this by 2022.#SundayMorning#Chandrayan2

That's a neat image congratulations @isro
This is one among the great achievements that make India proud.#Chandrayaan2

Chandrayaan-2 is the second lunar exploration mission of ISRO and it was launched on July 22 from Satish Dhawan Space Centre, Sriharikota, Andhra Pradesh. Although earlier it was supposed to be launched on July 15, the launching was postponed due to a technical glitch. The rover is expected to land on the moon on September 7 and it will make India the fourth country in the world to achieve a soft landing on the Moon; the first three are USSR, USA and China.

Girl Asks Her Cab Driver To Act Like Her Boyfriend, Here’s Why She Said So
UP Police Promoted Road Safety With A Creative Tweet On Friendship Day & Twitter Is Loving It