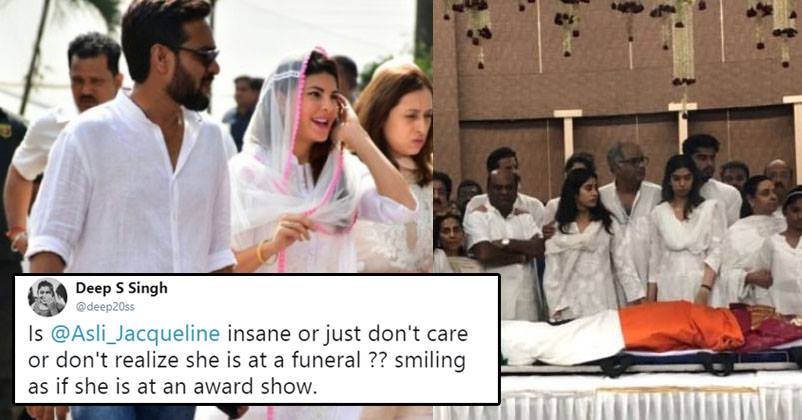 The legendary veteran actress Sridevi bid goodbye to this world on February 24. She was found dead in her hotel’s bathroom in Dubai where she went with her family to attend the wedding of her nephew. Initially it was said that she died of heart attack but later on, the forensic report revealed that the reason of her death is accidental drowning.

Her mortal remains were at last brought to Mumbai on 27th February at about 10:30pm subsequent to a post-mortem investigation which continued for 3 long days. 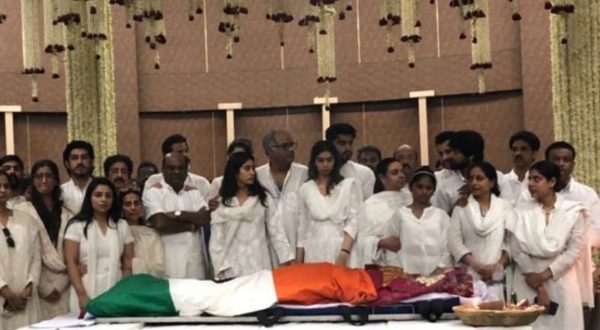 Her body is wrapped in tri-colour and is kept at the city’s Celebration Sports Club. Media is reporting live updates of Sridevi’s funeral which was attended by many celebs from the film industry who came to pay last respect to the icon. 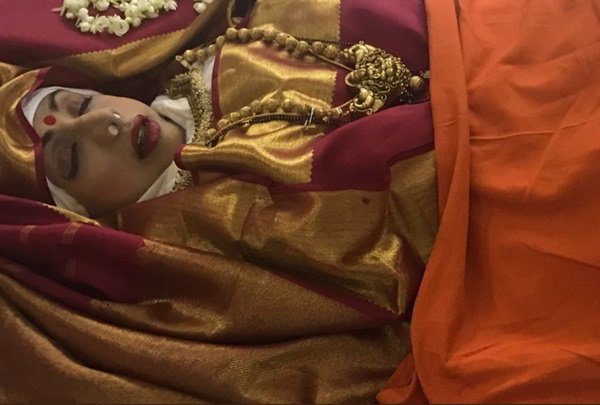 But there was one celebrity who invited criticism and wrath of people in Sridevi’s last journey.

We are talking about Jacqueline Fernandez who was caught smiling and appeared to be happy as she entered the venue. 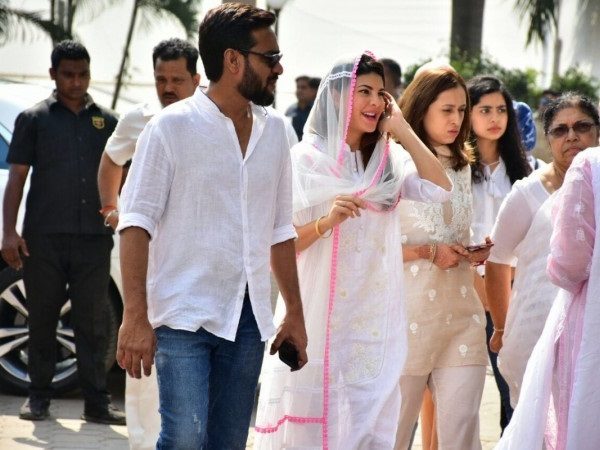 It was natural for her smiling pics to go viral on social media and as a result, netizens slammed her for her insensitive and shameless act. 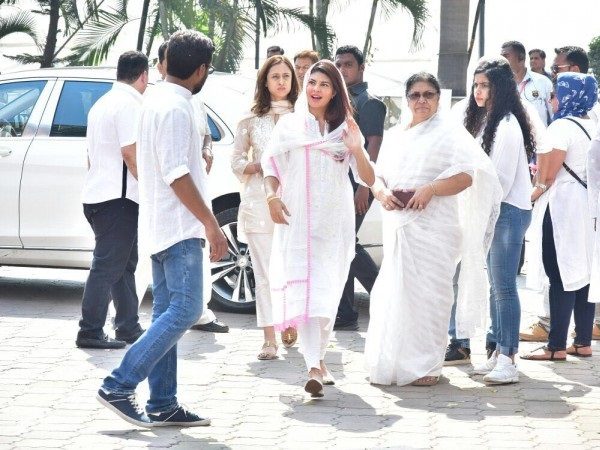 Stupid @Asli_Jacqueline was smiling her big fat smile throughout the funeral. She needs to grow some brains. #Sridevi #Sridevifuneral

What was so funny?

@Asli_Jacqueline 1) may I know what was so funny that you were smiling at a funeral meeting? Ur face is charming but u need not always smile at the wrong place plz & insult all us fans who didn't even get a chance to look at our icon Sridevi for one last time #Sridevifuneral

shame on u @Asli_Jacqueline you are smiling as if u are in a fun event . really shameless

@Asli_Jacqueline so you were talking bon the phone and smiling? Phone calls couldn't wait is it? Maybe u even took a selfie. As a fan of Sridevi and Hunan being I have every right to condemn this insensitive act of yours. https://t.co/XqELJUkGRh

Avoid going for the sake of publicity if you don’t have respect:

Dear @Asli_Jacqueline
If you don’t have respect for departed soul then avoid going for last rites just for the sake of media coverage. There was nothing to smile. #Sridevi was not only a actress but she was an institution of acting. A legend! Respect her.

Is @Asli_Jacqueline insane or just don't care or don't realize she is at a funeral ?? smiling as if she is at an award show. If you are not sad don't visit to show ur USELESS formalities #Sridevifuneral #RIPSridevi #Fake #Sridevi pic.twitter.com/1j8tZFm9yE

Is this the culture of Sri Lanka?

Did @Asli_Jacqueline just show a happy face or the ugly face of bollywood?
Is this Indian culture or Srilankan?#shame #Sridevi #AlvidaSridevi #sridevideath

Apparently u r there to pay ur last tributes to a dead person n to extend ur emotional support to her shattered family..WHAT'S THERE TO BE SMILING ABOUT?..DISGUSTING!! @Asli_Jacqueline pic.twitter.com/yZl8fJkBma

It was not the film set:

Shameless and disgusting to say the least 😷 First go on posting videos of how depressed you are and then show up like this at her funeral 👎 #fakeAF #JacquelineFernandez https://t.co/a8OkHylkd6

What do you have to say about Jacqueline’s act?

Everyone Asking Why Sridevi Was Wrapped In Tricolor During Last Journey. Here’s The Reason
Despite Bad Relations, Arjun Stood By Boney & Sridevi’s Daughters. Twitter Called Him A Gem