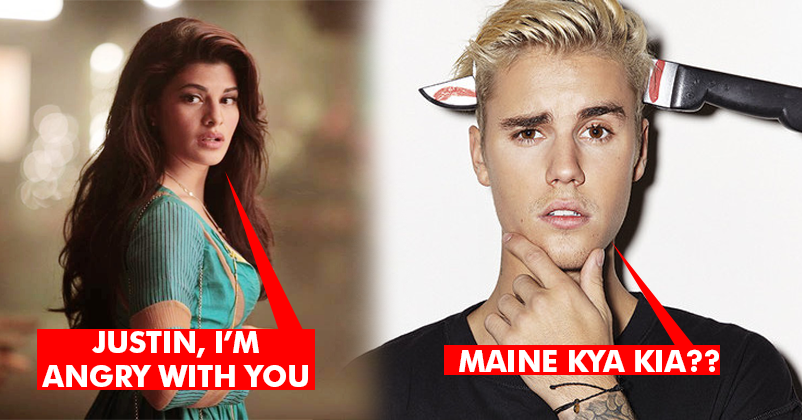 Jacqueline Fernandez is one Bollywood star who was happiest and most excited for Justin Bieber’s Purpose Concert in Mumbai. The Srilankan beauty was supposed to host an after party for Justin and her excitement for this was sky high. Check out one of her Instagram posts before Justin Bieber’s arrival-

Her hopes were, however, left shattered when Justin Bieber left the country quickly after completing the show. As per inside reports, Justin paid no heed to the arrangements and disappeared soon.

According to Mumbai Mirror, Jacqueline is the most upset by this act of his. She skipped the Judwaa 2 shooting and came all the way from London to host the bash only to be left disappointed later. She also had made plans of accompanying Justin for sightseeing to Gateway of India, Iskcon Temple, Colaba Causeway and a tour of film city but nothing really happened. What’s worse is the fact that Jacqueline couldn’t even get to meet Justin.

Before the concert, it was reported that Jacqueline has been chosen by the JB team to play host to him for his Indian concert. A source close to the star told Mid Day-

“One of Jackie’s main responsibilities is that she is hosting a really cool backstage party for exactly 20 of her friends during the concert.This will include many of her Bollywood pals like SRK, Varun Dhawan, Deepika Padukone, Ranveer Singh, Ranbir Kapoor, Alia Bhatt, Siddharth Malhotra, Arjun Kapoor and many others, along with her bestie-like-architect Ashiesh Shah. They will be watching the concert in a special enclosure behind the stage, where not only will they be able to have a private party while they view the Bieber magic, but also they can step out and see the audience if they feel like. Of course, there will be food and drinks served and a real fun atmosphere,”

Well, that’s sad, but considering the unbearable heat here in India, what else could we expect from Justin Bieber? LOL.

Sachin Tendulkar Reveals Which Actor Can Flawlessly Play His Role & You’ll Love His Choice
Anushka Stalked SRK & Spotted His Van In YRF Studio! SRK Had A Hilarious Reply For Her