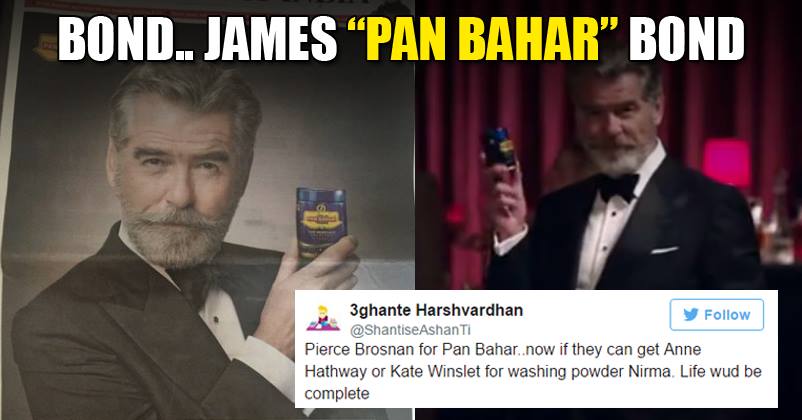 Rather than Pierce Brosnan, everyone recognizes him as the James Bond of 007 franchise and we all know that he loved Martini and that too shaken and not stirred, remember?

But wait; what has happened to his choice now? Everyone was shocked this morning, as they saw a full page ad of Pierce Brosnan endorsing ‘Pan Bahar’, a famous Pan masala in India. We just couldn’t believe our eyes on seeing this ad, which appeared in Times of India. Not only did he pose for it, he also did a video for this brand. Want to watch it? Here you go…

So, how did you find his Irish accent while saying ‘Pan Bahar’, interesting, isn’t it? Now, Twitterati went crazy after seeing this ad and you can’t miss out their hilarious responses.

Is it Kulbhushan Kharbanda?

Are we sure that it's Pierce Brosnan and not a fitter Kulbhushan Kharbanda? 😝 https://t.co/KEbON3AY04

Before and after visiting Kanpur!

Pierce Brosnan, the most famous James Bond is coming up with his new movie – James Bond – License to Spit. pic.twitter.com/wd9NuhrKho

Before every Bollywood movie!

So now before every Bollywood movie 'Pierce Brosnan' ad will be played instead of 'Gutkha Mukesh'
. pic.twitter.com/eBuOopMSmX

I will start chewing too!

He doesn’t even know what is there in the box!

Pierce Brosnan is endorsing pan bahar , i think that dude doesn't even know what is in that box. He think its m&m's.

When you want to kill yourself!

This ad has definitely surprised us, isn’t it? Some thought this is just ‘Photoshop’ but after watching the video, they were in for a surprise. After this, comedians have too much pressure on them to crack jokes on him, LOL! So guys what is your take on this? Do let us know in our comments section below.