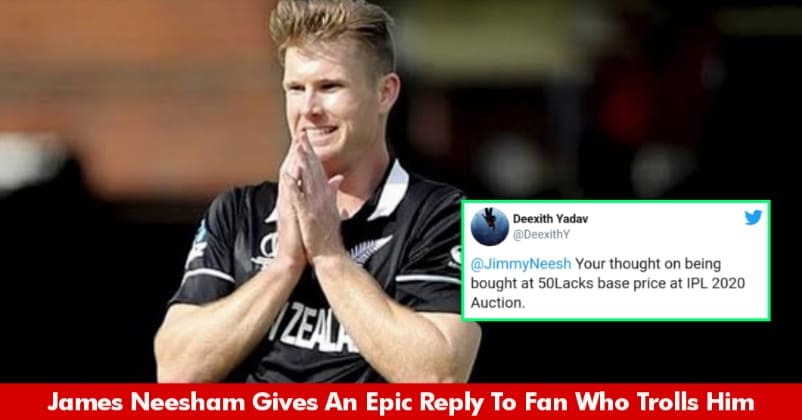 There is no denying the fact that the Indian Premier League (IPL) is one of the biggest sporting events of the world and not just cricket fans but the cricketers were also eagerly waiting for the IPL 2020 to take place. The league which was supposed to start from March 29 got postponed due to the coronavirus pandemic and it will now start from September 19 while we will get to know the winner of the tournament on November 10.

The IPL 2020 is not going to be organized in India as the situation of coronavirus is far from satisfactory and the number of COVID-19 positive cases is still increasing. The tournament will be played in Dubai, Abu Dhabi and Sharjah and we will get to see some prolific cricketers spreading the magic of their talent.

James Neesham, the New Zealand cricketer, will also be taking part in the IPL 2020 and he will be playing for Kings XI Punjab. KL Rahul is the newly appointed skipper of the Punjab team while R Ashwin who led the team earlier was released by the franchise and now he will be seen taking wickets for Delhi Capitals.

James is quite active on social media networks and recently, he conducted a Q&A session with his fans in which he answered many questions. One of his fans asked him what he thinks about being bought for a small base price of Rs. 50 lakhs.

Here is what the online user tweeted, “@JimmyNeesh Your thought on being bought at 50Lacks base price at IPL 2020 Auction.”

@JimmyNeesh Your thought on being bought at 50Lacks base price at IPL 2020 Auction.

Somebody else may have got annoyed after reading this tweet but James is a pretty cool-headed guy and he had a perfect answer for this question.

The New Zealand cricketer replied with, “Anybody who’s disappointed at 50Lakhs to play a game for 2 months needs their head checked”.

Anybody who’s disappointed at 50Lakhs to play a game for 2 months needs their head checked 🤷‍♂️ https://t.co/hgO1g0Ucd5

James Neesham hasn’t played cricket for the last five months as last time he played for New Zealand during the tour of Australia in March. The Kiwis were supposed to play three match ODI series against Australia but the series was postponed on account of the coronavirus outbreak after the first ODI was won by Australia.