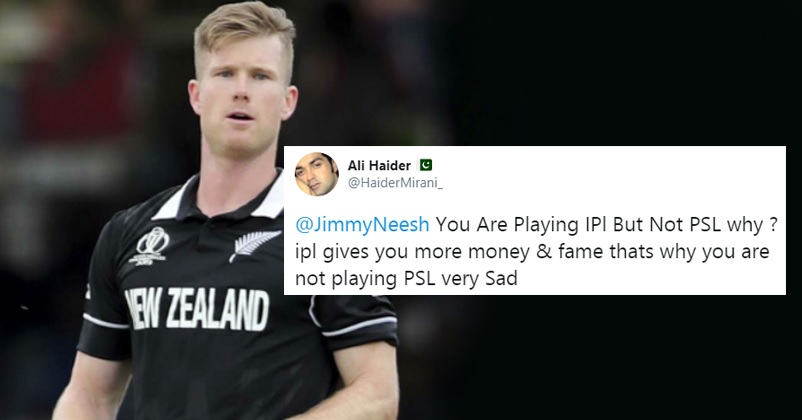 James Neesham is one of the most popular cricketers of the present times and he is loved by his fans not just because of his cricketing talent but also for the witty replies that he gives on social media networks. He has become an important part of the New Zealand squad in the shorter formats and there is no denying the fact that he has played an important role in taking his team to the finals of the ICC World Cup 2019. Kiwis lost the finals to England and James Neesham openly expressed his disappointment over the micro-blogging site Twitter as he asked kids not to take sports and advised them to choose baking or something.

James was also sitting at home for past few months due to the coronavirus pandemic and now he will be seen in the IPL 2020 playing for Kings XI Punjab (KXIP). The Punjab franchise has never won an IPL till now and James Neesham’s inclusion in the team will certainly make them stronger. The tournament is being organized in UAE as the number of cases of coronavirus positive patients in India is still on the rise and situation can’t be declared under control at the moment.

The first match of the IPL 2020 will be played on September 19 and the final will be played on November 10. Fans of James Neesham are pretty excited as they will soon see their favourite cricketer on the ground.

Recently, an online user asks the Kiwi cricketer about playing in the Indian Premier League (IPL) but not the Pakistan Super League (PSL). The Twitterati tries to have some fun by saying that he is playing in IPL because it gives him more money and fame.

Here is what the online user tweeted, “@JimmyNeesh You Are Playing IPL But Not PSL why? IPL gives you more money & fame that’s why you are not playing PSL very Sad #Pakistan”.

@JimmyNeesh You Are Playing IPl But Not PSL why ?
ipl gives you more money & fame thats why you are not playing PSL very Sad #Pakistan

James Neesham is known for giving apt and kickass responses on social media and this time also, he was absolutely ready as he wrote, “Or because PSL is in the middle of our home summer?”

Or because PSL is in the middle of our home summer? https://t.co/kab4La5vlX

The Indian cricket lovers are also pretty excited for the IPL 2020 but things have gotten little messy after two players and 13 staff members of Chennai Super Kings have tested COVID-19 positive.

Hopefully, things will be fine and everyone associated with the IPL 2020 remains safe.