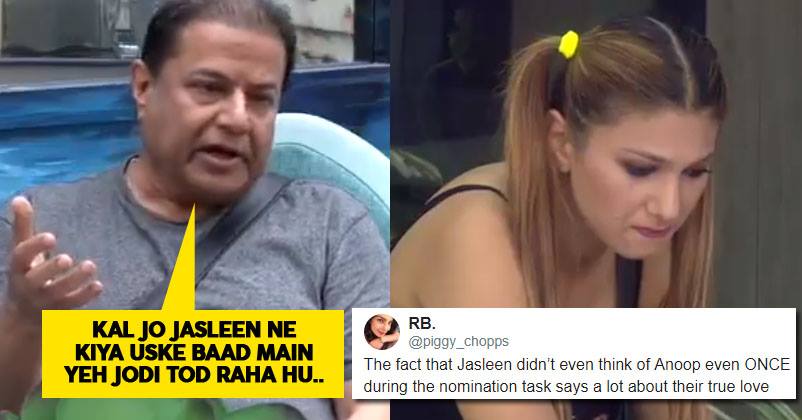 Bigg Boss 12 is going great with exciting twists, heated arguments, interesting fights, entertaining tasks and new controversies regularly. We all know that the makers have come up with a unique concept of “Vichitra Jodis” this season and the pair that is getting attention of people the most is undoubtedly that of Bhajan king Anup Jalota and his girlfriend Jasleen Matharu. The reason for the same is a huge age gap of 37 years between them; while Anup is of 65, Jasleen is just 28 years old.

We all have seen them indulging in PDA quite often; Anup has sung songs for Jasleen and praised here, whereas she has kissed him in front of all housemates and even dressed in bikini and asked him, “How do you like this mermaid?”
However in last night’s episode, we got to see a different side of this love story when the nominations task took place inside the Bigg Boss house. 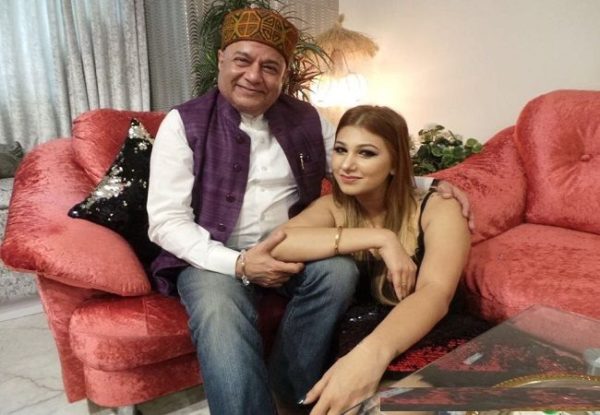 As per the task, singles will kidnap one member of a Jodi while the other member will be asked to fulfill the kidnapper’s demand in around an hour. Bigg Boss announced Dipika as the first kidnapper and she had to kidnap Anup while Jasleen was asked to obey Dipika’s order and do the task if she wanted to save herself and Anup from nominations. To set him free, Dipika asked Jasleen to destroy all her clothes and makeup products as well as chop off her hair to shoulder length. This shocked Anup, Jasleen and other housemates and Jasleen once tried to negotiate but Dipika was in no mood of negotiation.

Initially, Jasleen made up mind of doing it but she couldn’t destroy it all and gave up. When she chose her stuffs over Anup, the couple got nominated automatically and this not-sacrificing behaviour of Jasleen hurt Anup to such an extent that he would he announcing break up of this Jodi, as per promos.

Click here to watch the video of the incident on Voot

Twitter has also slammed Jasleen for her decision. Here are some selected reactions:

I am watching tomorrow precap and Cant stop laughing

I mean the way jasleen is choosing Make up and glamour over Anup ji
😂😂
Its means she was doing drama from two weeks
Lol! Exposed badly

#JasleenMatharu : I love #AnupJalota jee and nobody can understand the depth of our love😻#DipikaKakar : Ok cut your hair to shoulder level and give up make up also to save Anup from nominations.

#AnoopJalota: Ab main akela hun, Meri koi Jodi nai. Sahi Kiya Sir 👏🏻
#Jasleen never sacrificed anything for him. she got chances but rejected it & sent him for top ki salami, torture room.
And then there's Anup G who sacrificed his reputation to be with her in the show. 👎🏻

Anup Jalota: Do you like Makeup & clothes more than me?

This Anup Jasleen drama looks so scripted TBH. Their jodi itself is fake as hell. And Anup ji in devdas mode 😂 #BB12 #BiggBoss12

I have a doubt that they
AnupJalota Ji and JasleenMatharu truly love each other If the relationship was true then she's able to complete the task.
#BiggBoss12

Jasleen is using Anup ji to know how to become a fame, how a gentleman like Anup ji was trapped in the trap of Jasleen. #BiggBoss12

Do you think that Jasleen should have sacrificed her clothes, makeup products and hair or is her decision right according to you? Let us know.

Watch “Jasleen kisses Anup” in a previous episode of Bigg Boss 12 on Voot by clicking here.

Why Avengers: Infinity War Hindi Version Will Be A Treat?
Creep Asks Girl For S*X Chat. The Girl Deserves An Award For Her Perfect Reply