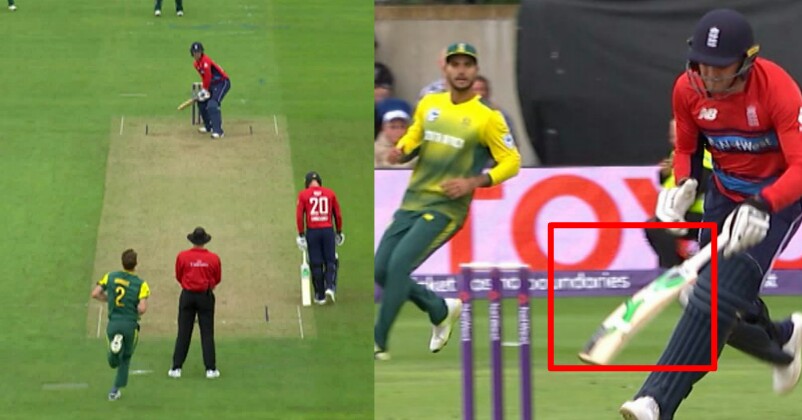 Cricket is no less than a religion in India and there are many who follow the game passionately; however, they too will have a problem in naming a batsman who has been declared out for obstructing the field. England cricketer Jason Roy has unfortunately earned himself the title of being the first batsman to be dismissed for obstructing the field in T20s. The South African cricket team is currently on a tour to England where they will be playing a three-match T20 series and this incident has taken place in the second match. South Africa gave a target of 175 runs to England and the host team was going good with 133/2 in 16 overs when Jason Roy, who was batting beautifully, got out at 67. Chris Morris was bowling the 16th over; Roy was at the non-striker’s end while debutant Liam Livingstone was on the striker’s end. Liam hit the ball towards backward point where it was fielded by Andile Phehlukwayo, so Liam didn’t take the run and sent Roy back who was almost half-way down the pitch. Roy changed his side and ran towards the crease and to stop Andile’s throw, he intentionally came in between of Andile and wickets. Andile’s throw hit Jason on his foot and the South African players made an appeal against Roy. The umpire Michael Gough declared the ball dead; then he discussed with another umpire and sent the appeal to the third umpire.

WICKET Roy out obstructing the field for 67 off 45 balls.

The third umpire took a lot of time before declaring Roy out and it seemed as if it was the turning point of the game and England lost the match by 3 runs.

We are sure that no cricketer will like to get his name associated with such type of dismissal. What do you say?